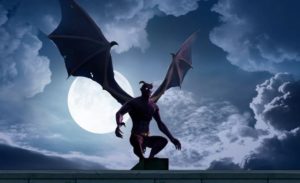 The deep, shadow shrouded jungles of South America are rife with carnivorous predators rarely seen by the human eye, but as intimidating as the creatures lurking in the dense rain forests of this mysterious continent may be, the arid plains of northern Chile are said to harbor a colony of chillingly bizarre beasts, which are quite unlike anything supposed to be living on the Earth.

Situated in the northernmost portion of Chile, less than 12-miles away from the port city of Arica, is a sprawling swathe of red sand desert known as Pampa Acha. The only real nod to the existence of humanity in this desolate region is the Pan-American Highway, which twists through this barren wasteland like an asphalt serpent.

It was on this lonesome stretch of road that in July of 2004, an army sub-officer with the “Cazadores” regiment named Carlos Abett de la Torre, his wife Teresa, their three children and a nephew would have a harrowing encounter with a group of fantastic creatures, which seemed to jump straight out of the pages of an ancient bestiary.

THE TORRE FAMILY AND THE GARGOYLES

At approximately 7:00 pm. on the day in question, the Torre family packed into Carlos’ pick-up truck and departed from their quarters in Fuerte Baquedano, which is located in the military community of Pozo Almonte, heading toward Arica to visit some relatives.

Knowing full well that he was in for long and monotonous drive with a car full of children, Carlos gamely threw the truck into gear and began motoring down the same highway he had been traveling for the better part of 25 years.

About two hours into their journey, Carlos was cruising at about 65-miles per hour through the Pampa Acha approximately 20-miles south of Arica. The road ahead was illuminated not only by the pick-up’s headlamps, but the bright moon that hovered above them in the cloudless sky.

That was when Carlos’ eldest daughter, Carmen, noticed a pair of extraordinary entities through the back window of the vehicle. According to Carmen she was astounded to see two creatures leisurely “floating” in the skies above. In her own words:

“I was traveling in the backseat with my brothers, talking, and suddenly everything went dark. Then I told my brother what I was seeing and he told me to keep quiet, because Mom gets nervous. Later I looked through the window and saw some things that looked like birds, with dogs’ heads and back swept wings. My father said they were like gargoyles.”

Carmen later estimated that the strange airborne critters that flew over her father’s pick-up truck were at least 6-feet in length and she admitted that at first she wasn’t sure if the creatures had wings or legs, but that the appendages were angled toward the rear of the creatures.

Carmen and her brother watched as the outlandish animals paced the truck, afraid to speak, lest they panic their anxiety prone mother. But their efforts were wasted as Teresa, who sat next to Carlos in the front seat, would catch sight of the peculiar avian duo through the windshield just moments later.

From her vantage point Teresa was afforded the best view of these anomalous animals, which the press would quote her as saying resembled “dog-faced kangaroos.” She claimed that the “gargoyles” seemed to match the speed of the truck, occasionally slipping ahead, then falling back, never traveling more than 60-feet from the vehicle.

By this point Carlos and the rest of his frightened brood were all stealing skyward glances and catching glimpses of these soaring evolutionary nightmares. He accelerated the truck, praying under his breath, terrified of the fate that might befall him and his family if these creatures decided to swoop down and attack their vehicle. The Torre family was in such a state of shock that none of them spoke. Carmen described the scene:

“We were speechless for some ten minutes [then] my Mom told us to react, and then we started discussing what we’d seen.”

Just when the Torre family was growing accustomed to the flying fiends above, another pair of the same species leapt in front of the truck on strong hind legs, which were shorter than their upper legs. Carlos managed to avert a collision with these land bound “gargoyles” and increased the pick-up’s speed, eventually leaving all four of the beasts behind.

When Torre family safely arrived in Arica they told their relatives about their bizarre sightings, but swore them to secrecy, concerned that the public ridicule which might follow the unveiling of their tale would somehow damage the military career of the family’s patriarch.

Although their sojourn with their extended family was enjoyable, it goes without saying that the entire Torre clan was anxious about the trip home.

Teresa even conceded: “We were terrified to go back,” but, much like every other journey Carlos had taken through Pampa Acha, the expedition proved to be mercifully uneventful.

Once back on base in Pozo Almonte, the Torre family honored their oath of silence, but when another sub-officer, Diego Riquelme, claimed to have encountered a dinosaur-like creature on the same stretch of road a few weeks later they decided to come clean.

Needless to say it wasn’t long before the press got wind of these bizarre stories and began churning out articles about the monsters seen on the Pan-American Highway. Soon after the story broke Scott Corrales of the Institute of Hispanic Ufology translated the story for the English speaking world.

The usually open-minded Chilean press was quick to claim that the eyewitnesses were likely seeing nothing more than ostriches, which must have escaped from a local breeder. The fact ostriches are flightless and that none of the birds were reported missing in the area was ignored by the media.

It also seems unlikely that seven individual eyewitnesses would confuse ostriches for either on the wing gargoyles or prehistoric reptiles, regardless of how unbelievable the alternative may be. So if these observers were not bearing witness to bird refuge escapees, then the question remains…