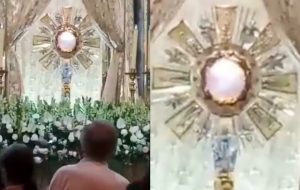 A video is circulating on social networks, which depicts the Eucharistic miracle: the Shrine, put up for the worship of believers, “pulsates” like a heart, reports aciprensa.com.

The video was recorded on Friday July 22 this year in the parish of Our Lady of the Rosary, in the city of Zapotlanejo, near Guadalajara, in the Mexican state of Jalisco.

The moment of Eucharistic veneration was led by the Argentine priest Carlos Spahn, founder and pastor of the Religious Family of the Immaculate Heart and Divine Mercy (FRICYDIM), who currently carries out his priestly ministry in Mexico.

In his statements to ACI Prensa, Fr. Spahn said that it all happened after the celebration of mass: “We exhibited the Holy Sacrament, I performed the prayers, and when I got up to go to the sacristy, this began to happen.”

“Some people saw it,” he continued. They “couldn’t believe what they were seeing, and we have at least two pieces of footage,” he said. These videos were taken by “people who quickly took out their cell phones, filmed it,” who immediately gave the footage to the priest “so they won’t alter it or anything.”

“So I attest that this is authentic, from the exact moment,” Spahn declared.

In later statements, the priest told ACI Prensa that the event was repeated at various times between 9 pm and 11 pm.

Archdiocese of Guadalajara, of which the parish of Our Lady of the Rosary in Zapotlánejo is a part, has not made a statement on this matter.

Offering “a personal interpretation,” of the pulsing host, Fr. Spahn said it reveals “the heart of Christ, which beats with love for men,” and which, he lamented, “is so outraged, so abandoned, so despised … that sometimes we don’t treat it as we should, with greater care, with more faith, with more dedication.”

Cautioning against any official stance on the occurrence prior to a judgment by the Church, Spahn clarified, “I’m not saying it’s a miracle officially, because I don’t have the authorization to do it.”