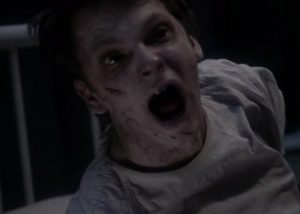 Many cultures, civilizations, and religions speak about disembodied spirits who can potentially invade the living bodies of humans, taking them over to control their physical form to their own wishes. The modern Catholic Church is one of the institutions that not only believes in the idea of a regular human but even promotes it to some extent by having their own investigation teams and exorcism specialists.

However, in the past the Church (due to science’s lack of knowledge about the human brain and associated mental conditions) has made the mistake of persecuting and violently “exorcising” people who suffer from psychiatric illnesses.

A couple centuries ago any person with Tourette’s syndrome or various forms of psychosis such as Schizophrenia were considered to be demonically possessed as their conditions provided the public with reason to regard them in that light. Modern science has made leaps and bounds in the area of analysis in the human brain and the concept of mental illness has been absorbed by the common public.

Even the Church has come to accept the latest discoveries about sicknesses of the mind, despite the fact that the Catholic Church and science have always been butting heads with each other.

Now that mental illnesses have found their place away from the concept of demonic possession, a true study of the warning signs of possession can be compiled. Think that someone close to you or even you might be being used by an evil spirit or demon? Here are some things to look out for…

Mental Changes in the Person

Even though these changes in the list can be indicative of certain mental problems (such as depression in particular) or even a newly formed drug usage or addiction, it is the combination of these mental alterations with the following categories that can truly show if a person is being possessed or not. However, these detailed signs may still not be enough to say if a person is being possessed by an outside entity. Self diagnosis or the diagnosis of someone by an average person or amateur can lead to many problems.

The studies to be listed here are meant to inform and act only as a small aid. If you are suggestible you probably should not be reading any further for the sake of your own sanity. If after reading though, you think that the person you have in mind truly is being possessed by a demon or dark spirit please feel free to reach out to religious officials or a professional exorcist to have a final, decisive diagnosis. People cannot read about brain tumors then diagnose themselves without the help of a specialist doctor after all, and demonic possession should be considered the same way.

Anyway, be sure to pay attention to these mental changes in the person you have in mind for both a practical reason (like they may be suffering from a mental illness) and a more spiritual one (as they may truly be taken over and used by an outside force).

Look for an affable person who suddenly becomes extremely quiet instead. Look for changes in sleeping patterns—can be sleeping a lot more than normal or a lot less than normal. Pay attention for evidence of self mutilation.

Look for the person to begin cursing a lot when it is not part of their normal character.

Notice any sudden aversions to religious objects and places, particularly to the point of destruction or defaming those same objects or places (like crosses, chalices, or churches).

The person may become threatening, abusive, or violent for no clear, outward reason. These characteristics are especially noticeable when the person lashes out to harm innocent animals.

An sudden increase in sexual tendencies or desires can also indicate possible demonic possession whereby the person practices excessive masturbation—most notably even going so far as to perform the deed in the presence of other people or even in public.

Having a change in taste buds can also be a tell tale sign as the person might be suddenly repulsed by once favorite foods all of the sudden with no linked reason behind the change or even start to enjoy foods that they used to detest.

During the night when the mind is at is most vulnerable, the person in question may also suffer from extreme nightmares or severe night terrors that are not normal for the individual or are happening on a consistent basis.

Pay very close attention to the person if they have frequent blackouts in their memories or start to lose great spans of time in their day as this trait can be key to identifying the times when the entity took over the physical form of the normal human.

Physical Alterations Within the Person

The person can begin to speak in tongues whereby they suddenly start talking in a language they cannot possibly know (an actual language such as Spanish or Hindi even which they have not previously studied but quickly adopt and understand) or even speaking their normal language in strange accents that are not their own natural way of speaking can point to the possibility of possession.

Other signs that are linked to the voice of the individual in determining possession by an aggressive entity are the person’s voice changes its tone frequently—from low to high to even a guttural type of growl. Another rather strange and off putting change in the person’s voice is when you can hear multiple voices coming from the physical body during a single time or instance.

The individual can appear to be catatonic or merely just goes very long periods of time without blinking. Since these particular symptoms can also indicate certain neurological conditions, be careful when assigning this as a symptom of demonic possession if there are no other signs or symptoms.

The physical form of a person can become unnaturally rigid and still to the point where they cannot move themselves or be moved even by more than one (or even a group) of other people.

The person can also demonstrate various forms of supernatural cognition such as precognition by knowing about future events or retrocognition where they know about past events that they should have no knowledge about. They also can exhibit knowledge about a person whom they have not met as of yet as a way to show the cognition of the spirit or demon possessing them. Telepathic powers where the person in question knows what you are feeling or thinking without any indication from you can be a possible sign as well.

Since the eyes are the window to the soul, physical changes can affect the eyes of the person in question also. Eye color (such as just the irises) can change to different but natural colors. Another way eyes can be a major sign of possession is when they entire eye itself becomes infected by black almost like a shark’s eyes. Alterations in other physical colorings are possible through the changing of hair tones.

Unusual movements of the person’s body should be closely paid attention to. They may seem to glide rather than walk or can twist their bodies in odd and seemingly impossible ways. Levitation is also a potential sign that points strongly to demonic possession.