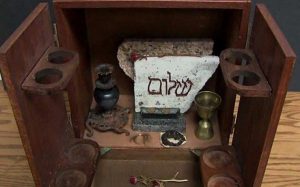 If you are convinced that the dybbuk box is real in spite of all evidence you can stop reading now. You’re not going to like how this ends.

The dibbuk box (or “dybbuk box“) is an alleged Jewish wine cabinet that gained notoriety for its eerie characteristics after it was featured in an extremely popular eBay auction listing in June of 2003.

According to Jewish folklore, a “dibbuk” is a malicious disembodied spirit that has the ability to haunt or possess physical objects or even people. This mysterious winebox was reported to have brought several strange, unfortunate and/or calamitous events to each of a series of successive owners. The dibbuk box, along with the many unnerving stories that accompany it, eventually became the subject of the 2012 motion picture “The Possession”.

The dibbuk box was initially put up for auction on eBay by a writer and media professional named Kevin Mannis, who also owned and operated a small antiques and furniture refinishing shop in Portland, Oregon.

According to his original eBay auction description, Mannis purchased the curious item at an estate sale in September of 2001 with the intention of refinishing it and giving it as a gift to his mother. The box was said to have been owned by a Polish Holocaust survivor named Havela who had recently passed away at the age of 103.

The Story According to Mannis

Havela was born and raised in Poland, and lived there until she was captured by the Nazis and sent to a concentration camp along with her family. Havela’s parents, brothers, sisters and children were all slaughtered in the concentration camp, and Havela herself only narrowly survived by escaping the camp with a small group of prisoners who fled to Spain.

Havela managed to stay in hiding in Spain until after the war, during which time she acquired the dibbuk box. Havela claimed that she had sealed a dibbuk inside of the box after she and a group of friends had invoked the spirit’s presence through performing a seance with an oracle board.

According to Havela’s granddaughter (who was present at the estate sale where Mannis purchased the box), the winebox was one of only three items Havela carried with her when she emigrated to the United States.

Havela’s granddaughter recounted several memories where she attempted to ask her grandmother about the significance of the dibbuk box, and each time her requests were met with a certain caution and fearful reverence. 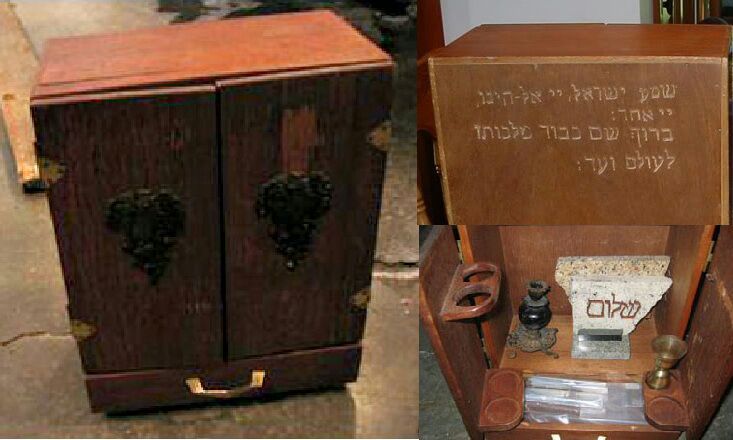 Havela always kept the box closed, and when asked what was inside of the box, she strongly admonished her granddaughter that the wine cabinet must remain sealed at all times, citing the presence of a dibbuk inside.

The granddaughter went on to tell Mannis that Havela had requested for the box to be buried with her at her decease, but the request was not fulfilled, as it was contrary to the rules of an orthodox Jewish burial. Mannis offered to let the granddaughter keep the box for the sake of its sentimental value, but she emphatically insisted that Mannis take the box, repeatedly stating that neither she nor the family wanted it.

Mannis later brought the box down to his basement workshop to begin the refinishing process. He temporarily left the shop to run a quick errand and left his salesperson in charge. Only about a half an hour after he left, the salesperson called him on his cell phone, screaming hysterically that someone had broken into the basement and was breaking glass and swearing loudly.

Mannis rushed back to the shop to find the salesperson curled up in a corner and sobbing uncontrollably. Mannis headed down to the basement where all of the noise had originated, and as soon as he got to the bottom of the steps, he smelled a strong, pungent odor similar to cat urine. Mannis thought this smell to be particularly odd, as he had never kept any animals in his shop.

Mannis quickly discovered that all of the lights in his basement had been blown out, and the glass shards from the nineteen total light fixtures were scattered all over the floor. Recognizing that there was only one way in and out of the basement, he ran back upstairs to see if the salesperson had seen anyone trying to escape, but she was gone.

Mannis attempted to contact her later to discuss the incident, but she refused to talk about it, and never returned to work again, even though she had previously been employed at the shop for two years. To this day, she has purposefully remained silent about the incident.

At the time of the incident, Mannis did not relate any of these happenings to the dibbuk box. He subsequently continued in his attempt to refinish the box, and opened it to see what was inside.

He found two wheat back pennies from the 1920s, two small locks of hair (one brown and one blonde) bound in string, a small granite statue engraved with the Hebrew word “Shalom” (spelled in Hebrew letters), a golden wine goblet, a small dried rosebud, and an odd-looking cast iron candlestick holder with legs in the shape of octopus tentacles. Mannis saved all of the items in a box and soon completed the work of refinishing the cabinet. He later gave the cabinet to his mother as a birthday gift in October of 2001.

Unfortunately, the cabinet had not been in his mother’s possession hardly any time at all before major trouble ensued. Immediately after Mannis gave his mother the cabinet, he stepped out of his shop to make a phone call, and came back roughly five minutes later to find his mother sitting with an expressionless face, unable to communicate verbally.

As it turns out, she had suffered a stroke, but was able to communicate with him in writing that she did not want anything to do with the gift anymore. Mannis subsequently tried to give the cabinet to his sister, but she gave it back after only a couple of days.

The same thing happened when he tried to give it to his brother. Both siblings claimed that the box was unfit to keep for different reasons ranging from an inability to keep the doors shut to a strange odor emanating from the box. He then sold it to a middle-aged couple, who subsequently returned it to his shop a few days later with a note that read “This box has a bad darkness”.

Exasperated, Mannis decided to keep the box in his house until he could figure out what to do with it. He soon began having a recurring nightmare in which a “demonic looking Hag” would brutally beat him up, and on some mornings he would wake up with actual bruises and injuries on his body.

Interestingly enough, at a later family dinner, he discovered that his sister experienced that same exact nightmare on the nights when the dibbuk box was in her house.

The legend of the dibbuk box began to grow by way of various blogs and forums that highlighted some of the outlandish experiences that many of the various owners of the box had experienced.

This caught the attention of Jason Haxton, curator of an osteopathic medicine museum in Kirksville, Missouri. Haxton purchased the box in order to further study it, but soon began to experience various health problems including coughing up blood, breaking out in hives, and vicious skin welts.

Haxton’s wife also experienced weeping sores and blisters. At his wit’s end, Haxton consulted a panel of Rabbis to find out how to put the dibbuk back in the box. Although the details of the method remain a mystery to this day, Haxton claims that the dibbuk has indeed been resealed back in the box, and it is currently kept in an undisclosed location.

Haxton would later write a book entitled “The Dibbuk Box” to chronicle his experiences, and it is from this book that the inspiration for the 2012 film “The Possession” was born.

The most damning evidence for the Dibbuk Box being a hoax comes surprisingly from the book “The Dibbuk Box.” During Haxsons research he uncovered several discrepancies yet reaches the astonishing conclusion that the Dibbuk box is both a hoax and real.

During Haxson’s research into the Dibbuk Box he followed a tip gave by an individual involved with the movie “The Possession” losely based on the Mannis story. That tip lead to a bar in Beaverton Oregon called Club Underground. Apparently Kevin Mannis worked there as a security guard and sometime cook.

Several employes of the Club Underground claim to recall hearing Mannis bragging about coming up with the story. One employee, nicknamed Shaggy, claims one of the locks of hair is one of his own and the other is from a Barbie doll. Also one of the club owners claimed Mannis had made and given him a wedding gift similar to the granite stone contained in the Dibbuk Box.

Haxson could never get Mannis to reveal the identities of the original owner in any way. Haxson also asked Mannis to show him the home where the estate sale was held. Mannis quickly identified the neighborhood but was unable to identify the specific house. Odd results for such a seminal event in one’s life.

Haxson tries to resolve these issues by coming to the conclusion that though Mannis did create the Dibbuk Box he some how imbued it with magical powers through Kabbalistic rituals. This seems a bit of a stretch.

It seems more reasonable that the Dibbuk Box is just a well-crafted fabrication. After all if Kevin Mantis was some sort of Kabbalistic wizard wouldn’t he have more notoriety than just the creator of an entertaining Ebay listing?

Whether or not the reported incidents surrounding the enigmatic dibbuk box are true or just a well-crafted fabrication, the mystery and intrigue of this peculiar relic continues to fascinate audiences all over the world.