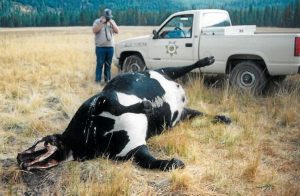 One of the most pervasive and grisly paranormal occurrences over the years are cattle mutilations. This form of killing of cattle and in some cases sheep and horses includes postmortem mutilations of an unusual nature. In the last 30 years, there have been about 10,000 unexplained animal mutilation cases dotted across the United States.

The mystery of cattle mutilation is further enhanced by having no witnesses to the crime, no obvious tracks leading to or away from the carcass, even when the incident happens on soft or muddy ground.

While the draining of blood is common, in most cases no blood is found at the scene. Some of the wounds that have been found on the carcasses of cattle show signs of the use of surgical instruments with intense heating that cauterizes the wound that was created. In some cases, flesh has been removed from certain parts of the carcass, notably the jaw area which exposes the mandible.

Explanations for cattle mutilations run the gamut from natural decomposition, natural predators such as wolves or bears, cult organizations, secret government projects, extraterrestrials and even paranormal activities. The United States federal government has even launched two separate investigations to find the source behind cattle mutilations.

Cattle mutilations are a relatively recent phenomenon with the first modern incident dating back to 1967 in Colorado when a horse named Lady was discovered deceased and mutilated in an unusual manner with the smell of a strong medicine in the air.

The event became stranger when reports of UFOs in the area around the time of the killing along with strange marks that were found near the carcass. The event gained national attention and while certain explanations were offered, the mysterious nature of the incident became the foundation for investigations of future cattle mutilation events.

By the late 1990’s, there had been incidents of cattle mutilations reported from as far north as Montana down to Texas and even a report of a human mutilation in Sao Paulo, Brazil, though the victim’s name was never released.

Although there has never been any direct evidence linking the reported cattle mutilations that have been reported since the original incident in 1967, many have contained some interesting links in that unusual elements or high levels of certain vitamins and minerals were found in tissue samples of the carcasses.

Each event usually has its own bizarre circumstances in terms of what has been removed, the lack of evidence at the scene or the inclusion of chemicals or minerals that are not normally present in an animal carcass.

The federal investigation concluded that most of the cattle mutilations were caused by natural predators either killing the animal or chewing off selected pieces of their remains with natural decomposition adding to the damage that was found.

However, some of the mutilations were suspected to be caused by humans, especially in cases where tranquilizers or anti-coagulants were found.

The true nature of all cattle mutilations may never be fully known, but explanations that go beyond the conventional and into the paranormal have yet to be proven to any real degree.

Doppelgänger: When You See Your Own Ghost