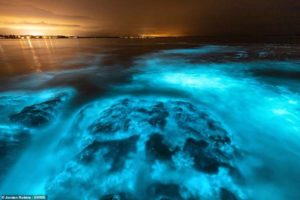 Jordan Robin filmed the spectacular event at a location known as Plantation Point in the waters of Jervis Bay in the region.

“This rare occurrence only usually happens once or twice a year,” he marveled, no doubt happy that he came upon the scene accidentally and managed to capture it.

Robin can be seen dipping his hand into the water in the fascinating video and running it through the glowing algae creating an almost ghostly effect.

“What can be seen as a red tide during the day,” he said, “the microalgae Noctiluca scintillans produces a bright blue glow at night, like seen in the video.”

Robin continued to explain that when disturbed, the bioluminescence is activated in the creatures.

Each individual Noctiluca scintillans is around 0.02 inches (0.5 millimetres) in diameter and has a tentacle-like ‘flagellum’ that helps it eat plankton.

The microscopic creatures bob around in the water column, regulating their buoyancy in order to move up and down.