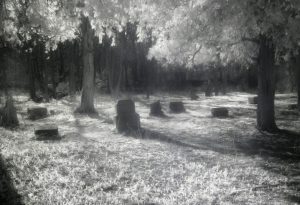 Bachelor’s Grove Cemetery is one of the oldest, most haunted cemeteries in the Chicago area. Legends, rumors, and facts mix together to make it a truly mysterious place.

Located in the south part of Cook County, Illinois, Bachelor’s Grove Cemetery is situated off the old Midlothian Turnpike. The part of the Turnpike closest to the cemetery has been closed now, leading to an isolation that has only hastened its fall into disrepair and vandalism.

Despite being surrounded by a chain-link fence, amateur ghost hunters frequently find their way into the area at night hoping to catch a glimpse of the paranormal happenings.

Like everything else about Batchelor’s Grove, its history is a subject of much debate among those who are considered experts.The first burial in the cemetery is thought to have taken place in 1844 and the last in 1989.

At one time, like most cemeteries, Bachelors Grove Cemetery was beautiful and park-like. There is a pond there, and at one time it was not unusual to see families picnicking and spending quiet family time among the graves of their departed loved ones, and swimming in the pond. Today, the cemetery is abandoned, except for its unearthly inhabitants.

As early as the 1960s, there was vandalism in the cemetery, usually as a result of the local teenagers drinking. But the cemetery gradually took on an air of the occult as authorities began finding the remains of satanic rituals.

Stones were broken and destroyed, graves were desecrated; a number showed signs of attempted grave robberies. It was then that visitors began reporting odd sightings of apparitions.

The Ghosts of Batchelor’s Grove

For many years people had seen spirits in the graveyard. In 1991, a photograph surfaced that seems to capture an actual apparition. Taken with an infrared film, the photo shows a woman sitting on top of what appears to be the bottom of a column. The figure is striking, but because it is so clear leads many to doubt its authenticity.

This apparition has become known as the Madonna of Bachelors Grove. Nearby, located next to the Fulton family plot, is the grave of an unnamed infant. Many paranormal investigators speculate that the Madonna is the child’s mother, still grieving for her lost baby; others believe that she is the wife of John Fulton who is buried in the cemetery.

In addition to the Madonna, there are many sightings of orbs, glowing lights which ghost hunters believe are the disembodied souls of the deceased.

These may be the souls of those buried here or may be from a more grisly cause; there have been a number of suicides in Batchelor’s Grove Cemetery and several murder victims were discovered there, most notably Audrey Ellis, who was found in September of 1966.

There have also long been reports of a house that appears to cemetery visitors and then vanishes. For years local experts claimed that there was no evidence that there were any habitations ion the cemetery grounds. However in recent years two foundations and wells have been found and verified.

Along with the Madonna, witnesses also claim to have seen the ghost of a man driving a horse and plow out of the lake in the middle of the cemetery. This is assumed to be the spirit of a farmer who drowned while plowing his field in the 1870s.

His horse was startled and bolted. It charged towards the pond, the farmer got caught in the reins, and both man and horse drowned under the plow’s heavy weight.

But these are not the only ghosts associated with this stagnant and eerie pond. Rumors persist that during the mob wars of the 1920s, Al Capone and his gang used the out-of-the-way pond to dump the bodies of rival gang members and others who had gotten in the way of his business.

There have also been a number of suicides there and several murder victims have been discovered, most notably that of Audrey Ellis in September 1966.