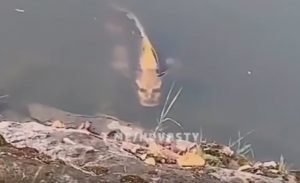 A resident of one of the Chinese villages filmed in the river an unusual fish with a “human face.”

According to media reports, the Chinese woman was shocked by what she saw when a “human face” appeared from the muddy water and quickly went to the shore.

Realizing in time, the woman managed to get a smartphone and capture this unusual creature on video.

The video that the Chinese woman shared on the Web is gaining popularity, and users continue to discuss what they see.

Some are trying to somehow explain this phenomenon, and some are just joking: for example, one of the users wrote that this carp reminds him of his father.