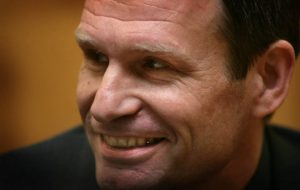 Armin Meiwes is a German man who achieved international notoriety for killing and eating a voluntary victim whom he had found via the Internet.

After Meiwes and the victim jointly attempted to eat the victim’s severed penis, Meiwes killed his victim and proceeded to eat a large amount of his flesh. Because of his acts, Meiwes is also known as the Rotenburg Cannibal or Der Metzgermeister (The Master Butcher). His main occupation was working as a computer repair technician.

Looking for a willing volunteer, Meiwes posted an advertisement on the website The Cannibal Cafe (a blog site for people with cannibal fetishes). Meiwes’s post stated that he was “looking for a well-built 18- to 30-year-old to be slaughtered and then consumed.”

Bernd Jürgen Armando Brandes, an engineer from Berlin, then answered the advertisement. Many other people responded to the advertisement, but backed out; Meiwes did not attempt to force them to do anything against their will.

The two made a videotape when they met on 9 March 2001 in Meiwes’s home in the small town of Rotenburg, showcasing Meiwes amputating Brandes’s penis and the two men attempting to eat the penis together before Brandes’s ultimate demise. Brandes had insisted that Meiwes attempt to bite his penis off. This did not work and ultimately, Meiwes used a knife to remove Brandes’s penis.

Brandes apparently tried to eat some of his own penis raw, but could not because it was too tough and, as he put it, “chewy”. Meiwes then fried the penis in a pan with salt, pepper, wine and garlic; he then fried it with some of Brandes’s fat but by then it was too burned to be consumed. He then chopped it up into chunks and fed it to his dog.

According to court officials who saw the video (which has not been made public), Brandes may already have been too weakened from the blood loss to eat any of his penis. Meiwes read a Star Trek book for three hours, while Brandes lay bleeding in the bath. Meiwes gave him large quantities of alcohol and pain killers, twenty sleeping pills and a bottle of schnapps, kissed him and finally killed him in a room that he had built in his house for this purpose, the Slaughter Room.

After stabbing Brandes to death in the throat, he hung the body on a meat hook and tore chunks of flesh from it. He tried to grind the bones to use as flour. The incident was recorded on the two-hour video tape. Meiwes ate the body over the next 10 months, storing body parts in his freezer under pizza boxes and consuming up to 20 kilograms (44 lb) of the flesh. According to prosecutors, Meiwes committed the act for sexual enjoyment.

Arrest, trial, and conviction of manslaughter

In April 2005, a German court ordered a retrial after prosecutors appealed against his sentence. They believed he should have been convicted of murder. Among the questions courts answered is whether Brandes agreed to his killing, and whether he was legally capable of doing so at the moment, taking into account his apparent mental problems as well as his significant intake of alcohol.

Other aspects of the retrial determined whether Meiwes killed to satiate his own desires (in particular sexual desires), and not because he was asked to, which Meiwes has repeatedly rejected during testimony. At his retrial, a psychologist stated that Meiwes could reoffend and still “had fantasies about devouring the flesh of young people”. On 10 May 2006, a court in Frankfurt convicted Meiwes of murder and sentenced him to life imprisonment.