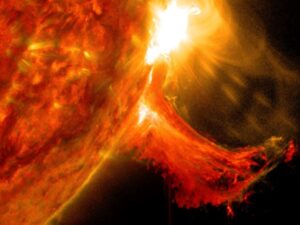 In the coming years, increased solar activity can lead to catastrophic events on Earth. For example, according to experts, the possible damage to the American economy could amount to about $ 40 billion.

According to Bloomberg, magnetic storms can cause satellite malfunctions and power outages across the planet. Aviation may be the first to suffer, the work of which directly depends on the state of satellites in low-earth orbit.

According to researchers, in the near future, the damage from solar storms will only increase.

Earlier, a special assistant to the President of the United States, Caitlin Jurkovich, said that solar flares are not “Hollywood fiction” at all, but a very real threat. In the face of this thunderstorm, 66% of US citizens are defenseless.

This is happening now. On May 22, 2021, sunspot AR2824 triggered a series of powerful flares which have not been observed by scientists in many years. In just 24 hours, NASA’s Solar Dynamics Observatory recorded 12 powerful flares.

During this flare, the Sun emitted such a loud shortwave radio burst that “it drowned out static lightning from a strong local thunderstorm,” according to researcher Thomas Ashcraft, who at the time was recording the signal with a radio telescope in rural New Mexico.

The signal from the Sun was so intense that even radio scientists in the Arctic heard it at midnight, although such radio bursts can only be detected during the daytime.

Ionization waves traveling through the Earth’s upper atmosphere caused shortwave radio interference over Southeast Asia on May 22 and North America on May 21. Radio amateurs, pilots and sailors could detect noise at frequencies below ~ 20 MHz.