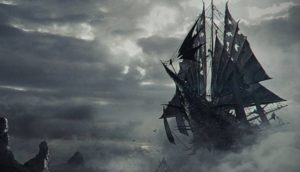 In 1761, a sailing ship named The Octavius departed London bound for China, and arrived safely at her destination about a year later.

She departed China in 1762, and headed towards the Arctic, with the captain having decided to take advantage of the unusually warm weather and chance an attempt at the shorter route via the Northwest Passage passage in the Arctic which until that point, had never been successfully completed.

The ship and crew were not to be heard of again for thirteen years until it finally made it through the passage, but manned by a dead crew some thirteen years later as a ghost ship.

It was assumed She had been overtaken by the Arctic and was lost along with her crew. Although it is more legend than fact, the Octavius remains one of the most famous of all ghost ship stories.

On October 11, 1775 a whaling ship called the Herald stumbled across the Octavius floating aimlessly off the coast of Greenland. Appearing to be unmanned and abandoned they pulled along side of the derelict vessel, and boarded her only to find the entire crew below decks frozen solid as if trying to escape the cold. The ship’s captain was discovered still sitting at his desk.

He was apparently midway through finishing a log entry from November 11th,1762, some thirteen years earlier. In his cabin there was also a dead woman, a dead boy covered with a blanket and a dead sailor with a tinderbox.

The terrified boarding party took only the captain’s log before departing the ship, because they were unwilling to search it any further fearing it was cursed and wanted nothing more to do with the ship.

The crew of the Octavius had lasted some time according to the log, until finally the cold and dwindling provisions got the better of them.

Seemingly, thirteen years after becoming trapped in the ice that had sealed her fate and that of her crew, the Octavius had become unlocked from the thawing ice pack and completed the northwest passage manned by a crew of dead sailors.

The ship’s last logged position puts it at about 250 miles north of what is now Barrow, Alaska. The Herald found her adrift off the coast of Greenland, which would actually mean that The Octavius and her crew was the first ship to make the journey. This feat would not be accomplished by a living crew until 1903-1906 when Roald Amundsen completed the passage.

The Story Of Incredible Visit Through Time or Space