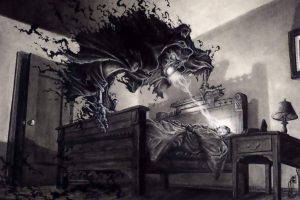 The experiences of Old Hag Syndrome, something that happens during sleep stages, vary. There is a paranormal element to them. These are some that are common to these attacks. Sudden awakening… Unseen pressure on chest…

They try to struggle, scream or move, but experience paralysis. Some victims report auditory and visual phenomena. They have heard footsteps before the attack, seeing monstrous shapes, hearing rasping breathing and/or smelling repulsive odors. Victims may sense an unnatural presence.

Galen, the Greek physician, believed Old Hag Syndrome was linked with indigestion. He wrote about this in the second century. This is still theorized. Other theoretical causes are circulatory problems or stagnation of blood, caused by lying in one position too long, sleep disorders and repressed sexual conflicts. These cannot explain all attacks. Science has no explanations for the causes of the attacks and why they happen.

Most common are those people who experience attacks once or occasionally with recurrences happening months or years later. Sometimes, people are victimized by these attacks repeatedly for a week or two. The rarest are people who have frequent chronic attacks for long periods of time.

Old Hag attacks can happen at night and during the day.

David Hufford has written the most comprehensive book, The Terror that Comes in the Night, about the Old Hag Syndrome. When he began this work, he thought it would take a few months and the result would be one article.

It took him almost ten years of research and the result was his book, which considers beliefs about spiritual evil that are universal from the perspective of scientific research about sleep paralysis.

He is a Professor of Medical Humanities and has joint appointments in Behavioral Science and Family Medicine, at the Penn State College of Medicine. Hufford is Director of the Doctors Kienle Center for Humanistic Medicine. At University of Pennsylvania, he is an adjunct professor of religious studies and a faculty member in the Master in Bioethics Program.

Hufford began his research in the Old Hag Syndrome when he was a member of the faculty in the Folklore Department of Memorial University of Newfoundland in 1971. He discovered that beliefs and reports of the paranormal, such as ghosts, omens, Will-o’-the-Wisp, ghost ships death omens and others were common and found in many cultures.

He discovered many of the islanders were familiar with the Old Hag Syndrome. One person said it was like someone was holding a person down when he was sleeping. There was paralysis and all he could do was scream. People believed that a person would die if not awakened.

He found the primary definitive features to be a person’s impression of being awake, paralysis, fear of moving or restraint, realistic perception of the environment and fear.

Secondary features, reported more than once were lying on one’s back, sensing a presence, feeling pressure, usually on one’s chest and a supernatural presence, which were the most common and most people experienced one or more of these. The fear of dying was not as common.

Hufford found theoretical causes of Old Hag. One is calling the Hag. One case involved a romantic triangle between John, Robert and Jean. Jean and John were dating steadily, but Robert was trying to date her. About a month after he began this, he was being hagged. He felt pressure on his chest, as if he were being strangled.

He was told to put a board over his chest and hold an open pocket knife. When he woke the next morning, the knife was impaled in the board. Had it not been for the board, he would have been killed.

Robert believed that John was the Hag and that his jealously was the cause of the hagging. He thought that maybe the Hag did not return because it thought it had killed him. He told people that the Hag was human.

He could hear the footsteps and recognize it. He could not speak, just grunt. His throat was affected and his breath was taken away. The Hag appeared when he was sleeping, but its presence woke him. He was always lying on his back when this happened and, usually, he was also stressed. He believed the Hag was the result of a curse.

Later, Robert learned that according to lore, the way to call a hag is to recite the Lord’s Prayer backwards in the devil’s name. To avoid a Hag, one draws blood or uses the word of God and keeps a light on.

Another case is the hagging of a woman. The informant said he and his friends were in a bunkhouse and a pretty girl was there. One of the men wanted to kiss her, but she refused, so he said he would hag her.

She did not believe he would do this. That night, she saw the man standing over her bed with a knife. She was paralyzed and frightened. Her mouth foamed. Her father was able to bring her around by repeating her name backwards.

The informant said after the girl went home, the hagger removed his clothes, knelt and said the Lord’s Prayer backwards. He went under the covers, pulled out a knife and stabbed it in a side board several times. The man repeated, “Hag good Hag,” from time to time.

The informant believed that while the hagger was in bed, his spirit hagged his victim. I think that the most likely explanation, if this is true, is that this was done by an out of body experience, OBE. OBEs have been researched and documented.

After this happened, the girl said that if she had known he was going to hag her, she would have had a bottle ready because of the belief that a spirit will die if it is swung at with one. When the man learned about the bottle, the hagging stopped.

There was the elderly woman who woke up every night for a month. She experienced cold sweats, panic and frenzy, as if she had epileptic seizures. She was treated for epilepsy. The treatment did nothing.

A doctor who had treated people in the community for over twenty years was consulted. He found out that the victim believed that an old lady who was known as a witch was witching her. His advice was for her to urinate in a bottle, cap it and put it under her bed, which she did.

Several days later, the reputed witch went to see the doctor to ask him to have the victim undo the bottle. He told her to remove the curse she had put on the victim. She did. Both of the women were cured.

The reason why the “witch” saw the doctor? She could not urinate.

Supernatural explanations are the oldest ones to be believed by Newfoundlanders. The belief continued into modern times.

Old Hag Syndrome… Is the cause physical? Entities? Witchcraft? OBEs? Telepathy? Psychiatric? Psychological? Or combination of two or more? Each theory offers its own evidence and beliefs. Until there is more research, I rule nothing out.