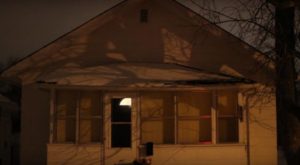 Perhaps the first indication that something strange was going on at Latoya Ammons new home were the swarms of flies. The flies appeared at the house on Carolina Street in Gary, Indiana, just days after a new family moved in. The strange thing is that it was November of 2011, during the cold Indiana Winter, not the time of year when flies would be expected. As it turned out the flies would soon be forgotten, at least for a while, as months of bizarre phenomena unfolded, culminating in a series of exorcisms.

The family involved in the case consisted of Latoya Ammons, her 3 children and Ammons mother Rosa Campbell. Strange phenomena began quickly and became commonplace over the coming months. The family often heard the sound of footsteps climbing up the basement steps and the sound of the door leading from the kitchen to basement opening.

Even when the door was locked the creaking sound of it opening was heard. The sound of footsteps would soon become footprints as Rosa Campbell woke one night to find the shadowy figure of man in her room. Campbell jumped from her bed and the phantom figure disappeared, leaving behind large wet footprints.

Events in the home took a dramatic leap on the 10th of March. It was about 2 am, the family would normally be sleeping but a loved one had died and family and friends remained gathered at the Ammons house. Ammons went to her mother’s room where her 12-year-old daughter and a friend were. As she entered the room Ammons began to scream. Others in the home quickly ran to the room and all witnessed Ammons’ daughter levitating above the bed. The group began to pray and the apparently unconscious girl slowly lowered onto the bed. The girl soon woke and had no memory of what had occurred.

Ammons and Campbell were not sure what they were dealing with but knew they needed help. They contacted several churches but only one seemed to be willing to listen to their story. After a visit to the home the church informed them that the house had spirits and should be cleaned with bleach and ammonia. Ammons also contacted mediums who believed that the home was filled with evil, claiming the house was home to more than two hundred spirits and demons.

The women followed most of the instructions they were given to rid the home of the demons and whatever else may have been in the house, including building an altar under the basement stairs. The only advice they didn’t follow was to move out, that was not an option for financial reasons. Three days after the house had been cleansed the demons returned in terrifying fashion.

Latoya Ammons 3 children began to display new and freighting behavior. Her 12-year-old daughter would later tell investigators of being held down and choked by an unseen force and told that she would be dead in twenty minutes. The 7-year-old boy was found sitting in a closet talking to an invisible being. When ask who he was talking to he said it was a little boy who was telling him about “what it feels like to be killed.” The children also began to display a strange appearance. Ammons said their eyes would bulge, they would speak with very deep voices and had “evil smiles.”

Fearing for their safety, Ammons took the children to see their family doctor, Geoffrey Onyeukwu. The doctor examined everyone involved and, according to his notes, believed that the family was suffering from delusions and hallucinations. The situation then became chaotic when the 7-year-old began to growl and curse at Dr. Onyeukwu.

The boy then appeared to raise up off the floor before slamming into a wall as if he had been thrown. The 2 boys both passed out and could not be revived so 911 was called. The 2 were taken to Methodist Hospital where they woke up, the 9-year-old appearing to be fine but the 7-year-old was screaming and thrashing violently. It reportedly took 5 people to hold him down.

Indiana’s Department of Child Services was called and sent investigator Valerie Washington to make the initial report on the case. As part of the investigation Latoya Ammons underwent a psychological examination, she was found to be “of sound mind.” It was while Washington was interviewing Ammons that the 7-year-old began to growl, his eyes rolled back and he suddenly grabbed his brother around the neck and began choking him. He refused to let go and his hands had to be pried loose by hospital staff. It was getting late but the most bizarre event of the day was yet to occur.

Washington was about to begin writing her initial report on the Ammons case when she decided to speak with Ammons’ 2 sons once again. The 2 boys along with Rosa Campbell, Valerie Washington, RN Willie Walker and other medical staff went into a small examination room. Almost immediately the younger boy began staring at his older brother and said “It’s time to die” and “I will kill you.” In response the 9-year-old boy got an “evil smile” on his face and as everyone looked on he appeared to “glide” across the floor to the wall. He then walked backwards up the wall and onto the ceiling, flipping over Campbell’s head and landing on his feet.

Valerie Washington had all the information she needed for her report. It was decided by doctors that the 7-year-old would be held overnight at the hospital. The boy’s mother stayed with him while Rosa Campbell took the 2 other children to stay with relatives. The next day the whole family was back at the hospital to celebrate, it was the 7 year olds birthday. It was not a happy occasion however, as Latoya Ammons learned that DCS had moved to take emergency custody of her children. The youngest child was sent for further psychological evaluation while the two older children were placed in a temporary home in Gary.

Emerging from this darkest of times, hope. A Methodist Hospital chaplain, aware of the bizarre story of the Ammons family, called a friend. The call was made on April 20, 2012 and went to Father Michael Maginot, the priest at Saint Steven Martyr Parish in Merriville, Indiana. The Chaplin believed that the 9-year-old walking up the wall, as well as other phenomena witnessed at the hospital, may have indicated that the boy was possessed.

Just 2 days after receiving the call, Father Maginot went to the Ammons house on Carolina Street and spent 4 hours interviewing Ammons and Campbell. While there, Fr. Maginot saw the evidence of the families past attempts to rid the home of evil. The altar that the mediums told Ammons to build was still under the basement steps and salt was strewn about the home. Fr. Maginot blessed the house and left believing that there was true evil involved in the case. He also convinced Ammons and Campbell that it was no longer safe to stay at the house on Carolina Street and the 2 agreed to stay with relatives.

On May 10th the official investigation of the case continued at the Ammons house. The group assembled included Ammons, Campbell, Fr. Maginot, several police officers and DCS case worker Samantha Illic. Illic was assigned to investigate the family after Valerie Washington refused to work on the case. Latoya Ammons would not enter the home so Rosa Campbell led the group into the house. Police and Fr. Maginot were interested in the area under the basement stairs where Ammons had built the altar. It was the only area of the basement that was not covered with concrete. Police dug down several feet but found nothing of interest and the visit was uneventful.

As he delved deeper into the Ammons story Fr. Maginot came to the conclusion that it was the mother, Latoya Ammons, that was possessed by demons. While the youngest child did have mental/emotional issues, all of the children seemed to be controlled by Ammons and her zealous religious beliefs. Father Maginot next approached Bishop Dale Melezek about performing an exorcism on Ammons. Bishop Melezek had never approved a major exorcism, an exorcism with the full backing of the church, in his 21 years as Bishop and did not grant Fr. Maginot’s request. The Priest however could and did perform a minor exorcism on Ammons. The results were less than expected and maybe just made things worse.

Fr. Maginot reported the failed exorcism to Bishop Melezek and again ask for permission to perform a major exorcism on Ammons. By this time Fr. Maginot had much more information about what was happening to Latoya Ammons. Most shocking was his claim that Ammons was possessed by the mighty demon Beelzebub, Lord of the Flies, as well as the demons captains and lieutenants. Reluctantly the Bishop granted permission to carry out a major exorcism on Ammons. In all Fr. Maginot performed 3 exorcisms on Latoya Ammons at his church in Merriville. The first 2 were performed in english the last one, performed in June of 2012, in Latin. The exorcisms seem to have been effective and Fr. Maginot declared Latoya Ammons to be free of demonic possession.

Following her exorcism, Ammons continued to work to regain custody of her children and by November, the children were back home with their mother. The DCS case on the Ammons family was closed in February of 2013. According to Fr. Maginot the Ammons family is now doing well and currently living in Indianapolis.

In 2014, paranormal investigator Zak Bagans purchased the house for $35,000 and demolished it in January 2016 after filming a documentary in it, titled “Demon House” that was released on March 16, 2018. Dread Central’s Steve Barton called it “one of the single most compelling documentaries on the existence of the supernatural that I’ve ever witnessed.”. Los Angeles Times reviewer Noel Murray called the film “hooey”.