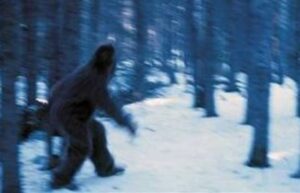 Writings of British officials residing in the Himalayan region of the Indian subcontinent during the nineteenth century contain sporadic references to sightings and footprints of wildmen called Yeti.

The Yeti were first mentioned by B. H. Hodgson, who from 1820 to 1843 served as British resident at the Nepalese court. Hodgson reported that in the course of a journey through northern Nepal his bearers were frightened by the sight of a hairy, tailless, humanlike creature.

Many will suggest, on hearing a report like this (and hundreds have been recorded since Hodgson’s time), that the Nepalese mistook an ordinary animal for a Yeti.

The usual candidates for mistaken identity are bears and the langur monkey. But it is hard to imagine that lifelong residents of the Himalayas, intimately familiar with the wildlife, would have made such mistakes. Myra Shackley observed that Yeti are found in Nepalese and Tibetan religious paintings depicting hierarchies of living beings.

“Here,” said Shackley, “bears, apes, and langurs are depicted separate from the wildman, suggesting there is no confusion (at least in the minds of the artists) between these forms.”

During the nineteenth century, at least one European reported personally seeing a captured animal that resembled a Yeti. A South African man told anthropologist Myra Shackley:

“Many years ago in India, my late wife’s mother told me how her mother had actually seen what might have been one of these creatures at Mussorie, in the Himalayan foothills. This semi-human was walking upright, but was obviously more animal than human with hair covering its whole body. It was reportedly caught up in the snows… his captors had it in chains.”

During the twentieth century, sightings by Europeans of wildmen and their footprints continued, increasing during the Himalayan mountain-climbing expeditions. 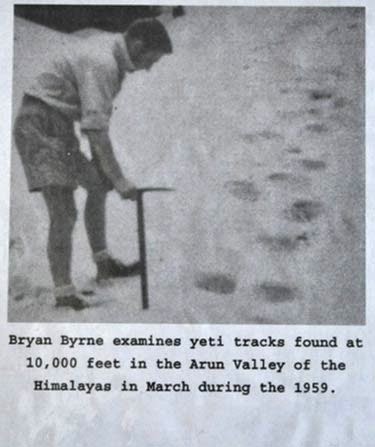 In November of 1951, Eric Shipton, while reconnoitering the approaches to Mt. Everest, found footprints on the Menlung glacier, near the border between Tibet and Nepal, at an elevation of 18,000 feet. Shipton followed the trail for a mile.

A close-up photograph of one of the prints has proved convincing to many. The footprints were quite large. John R. Napier considered and rejected the possibility that the particular size and shape of the best Shipton footprint could have been caused by melting of the snow.

In the end, Napier suggested that the Shipton footprint was the result of superimposed human feet, one shod and the other unshod.

In general, Napier, who was fully convinced of the existence of the North American Sasquatch, was highly skeptical of the evidence for the Yeti. But, as we shall see later in this section, new evidence would cause Napier to become more inclined to accept the Himalayan wildmen.

In the course of his expeditions to the Himalaya Mountains in the 1950s and 1960s, Sir Edmund Hillary gave attention to evidence for the Yeti, including footprints in snow.

He concluded that in every case the large footprints attributed to the Yeti had been produced by the merging of smaller tracks of known animals. To this Napier, himself a skeptic, replied:

“No one with any experience would confuse a melted footprint with a fresh one. Not all the prints seen over the years by reputable observers can be explained away in these terms; there must be other explanations for footprints, including, of course, the possibility that they were made by an animal unknown to science.”

In addition to Westerners, native informants also gave a continuous stream of reports on the Yeti. For example, in 1958 Tibetan villagers from Tharbaleh, near the Rongbuk glacier, came upon a drowned Yeti, said Myra Shackley in her book on wildmen. The villagers described the creature as being like a small man with a pointed head and covered with reddish-brown fur.

Some Buddhist monasteries claim to have physical remains of the Yeti. One category of such relics is Yeti scalps, but the ones studied by Western scientists are thought to have been made from the skins of known animals.

In 1960, Sir Edmund Hillary mounted an expedition to collect and evaluate evidence for the Yeti and sent a Yeti scalp from the Khumjung monastery to the West for testing. The results indicated that the scalp had been manufactured from the skin of the serow, a goat-like Himalayan antelope.

But some disagreed with this analysis. Shackley said they,

“pointed out that hairs from the scalp look distinctly monkey-like, and that it contains parasitic mites of a species different from that recovered from the serow.”

In the 1950s, explorers sponsored by American businessman Tom Slick obtained samples from a mummified Yeti hand kept at Pangboche, Tibet. Laboratory tests were inconclusive, but Shackley said the hand “has some curiously anthropoid features.”

In May of 1957, the Kathmandu Commoner carried a story about a Yeti head that had been kept for 25 years in the village of Chilunka, about 50 miles northeast of Kathmandu, Nepal.

In March of 1986, Anthony B. Wooldridge was making a solo run through the Himalayas of northernmost India on behalf of a small third world development organization. While proceeding along a forested snow-covered slope near Hemkund, he noticed fresh tracks and took photographs of them, including a close-up of a single print that resembled the one photographed by Eric Shipton in 1951.

Pressing onward, Wooldridge came to a recent avalanche and saw a shallow furrow, apparently caused by a large object sliding across the snow. At the end of the furrow, he saw more tracks, which led to a distant shrub, behind which stood “a large, erect shape perhaps up to 2 meters [about 6 feet] tall.”

Wooldridge, realizing it might be a Yeti, moved to within 150 meters (about 500 feet) and took photos.

“It was standing with its legs apart,” he stated, “apparently looking down the slope, with its right shoulder turned towards me. The head was large and squarish, and the whole body appeared to be covered with dark hair.”

In Wooldridge’s opinion, the creature was definitely not a monkey, bear, or ordinary human being. 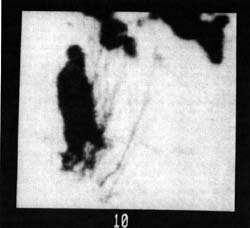 Wooldridge observed the creature for 45 minutes but had to leave when the weather worsened. On the way back to his base, he took more photographs of the footprints, but by this time they had become distorted by melting.

On his return to England, Wooldridge showed his photographic evidence to scientists interested in the wildman question, including John Napier. At a distance of 150 meters, the creature appeared quite small on the 35 mm film, but enlargements did show something humanlike.

Describing the reactions of those who saw his photos, Wooldridge stated:

“John Napier, a primatologist and author of the 1973 book Bigfoot: The Yeti and Sasquatch in Myth and Reality, has reversed the skeptical position he had previously expressed, and now describes himself as a Yeti devotee.

Myra Shackley, an archaeologist and author of the 1983 book Wildmen: Yeti, Sasquatch and the Neanderthal Enigma, has seen the full sequence of photographs, and believes that the whole experience is very consistent with other reports of Yeti sightings. Lord Hunt, leader of the successful 1953 Mount Everest Expedition, who has twice seen Yeti tracks himself, is similarly convinced.”