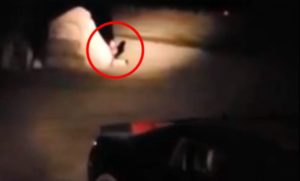 This strange video was posted on the Internet about a month ago, but for some reason did not become widely known.

According to the man who posted this video, the mysterious incident was filmed by his relatives who live in Saskatchewan, Canada.

In the video, you can hear two people talking in the dark and one of them shines a flashlight in the direction of a large stone and there a little man protrudes twice in a red cap and a red jacket. The creature looked like a little dwarf or gnome.

The Internet user who posted this video says that he himself believes in the existence of these little men, because there are a lot of Native American stories about them and in these places many residents also believe in them.

“I think this video is completely real, because my relatives shot it, but they didn’t care about uploading this video to the Internet and promoting it. For many years I heard stories about these creatures when I lived in this area”, wrote the author of the video.

What kind of creature it was – is unclear. Eyewitnesses after some time decided to see who was hiding behind a stone, but there was no one there.