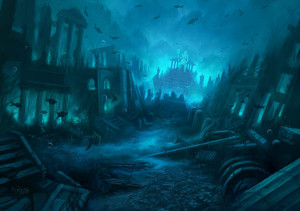 The most recent satellite technology, DNA evidence, and a more precise translation of Plato’s work, has exposed convincing facts that the legendary island was actually in the Mediterranean Sea, just a couple of kilometers north of the Greek island of Santorini.

More precisely, the newest research verifies that, around 9600 BC when, according to Plato, the story of Atlantis took place, many of the Cyclades Islands were connected by a flat terrain, today called the “Cyclades Plateau.”

This now 400 feet under water plateau created the body of a large island, while the modern islands of Cyclades fashioned rows of mountains that emerged in all the “right places”, when comparing those to Plato’s story.

The northern portion of the sunken island is comprised of mountains which reached the shores. There’s an oblong valley directly below this mountainous region, and a second valley, closer to the center of the island that is two thirds the size of the oblong valley.

Also, Santorini, a setting of an island within an island, and a place where many scholars in the past had placed the crown-city of Atlantis, falls within 9 km from the grand-island, and exactly as Plato stated.