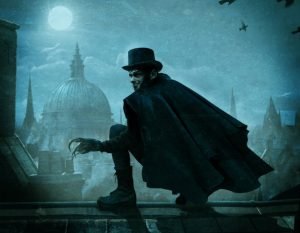 English folklore gives us the account of a paranormal being known as Spring-heeled Jack. He was known in the Victorian era for his startling jumps. People are said to have seen him for the first time in 1837. Later he was seen all over England, especially in the suburbs, Scotland, and the Midlands.

Many theories have been talked about as to who or what he is. This urban legend was popular in its day because of the bizarre appearance of Spring-heeled Jack and his amazing leaps. He became the topic of several fictional works. He was said to have a terrifying appearance with clawed hands and eyes that were like balls of fire.

Some say that he wore a helmet and had a very “devil like” aspect to him. Still others said he was quite tall and thin and almost like a gentleman. Wilder reports said he could breathe out blue and white flames with claws as fingertips. Some say he could talk in English.

In the 19th century there were reports of ghost in the London streets and these figures preyed and stalked lone pedestrians. These stories formed a ghost tradition in London and some writers claim this gave way to the stories of Spring heeled jack.

The Hammersmith ghost in 1803 and 1804 was said to be around the outer fringes of London and would appear again in 1824. Another apparition called the Southampton ghost was said to assault people at night. This ghost was said to leap over houses and had the characteristics of Spring heeled jack.

There have been many alleged sightings of Spring heeled Jack.

In 1837 Mary Stevens was walking to where she worked as a servant after visiting her family. On her way a strange figure leaped at her from a dark alley. It is said the figure immobilized her with the grip of his arms and began to kiss her face as he ripped her clothes off.

He was said to have cold and clammy “claws.” Mary screamed and the figure took fleeing form the scene. Several residents came out after all the noise but the attacker was never found. The next day it was said that the figure picked a new victim near her home.

It was said he jumped in front of a carriage and caused it to crash. The witnesses to the ordeal said he leaped over a nine-foot-high fence while making high-pitched laughter. News of the character spread. He was given the nickname Spring heeled jack.

A report from the Brighton Gazette on April 14th 1838 related how a gardener in Rosehill, Sussex was terrified by a creature of a nature that wasn’t known.

The incident occurred on April 13th. The gardener said it appeared to be the shape of a bear of some other animal on four feet. It climbed the garden wall on all fours and then jumped down and chased the gardener for some time.

After it scared the gardener it made its escape back over the wall. 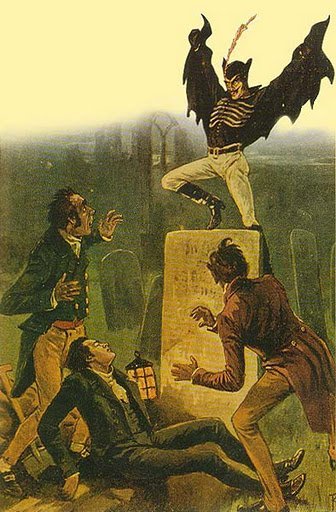 It was reported by Jane Alsop on February 19, 1838 that someone knocked at the door and said he was a policeman. She was told to bring a candle as the police officer said they had captured Spring heeled jack.

She brought the candle and they went to a lane. The moment they arrived he threw off his cloak and presented her a frightful appearance. He vomited blue and white flames from his mouth and he had eyes of “red fire.”

It was said that he grabbed her and began tearing at her clothes. She tried to get away and he tore at her neck with claws. She managed to escape and was rescued by her sister.

Eight days after the Alsop attack 18n-year-old Lucy Scales and her sister were on their way home from visiting family. They observed a person standing in a passage.

She walked in front of her sister. When she got up to the person she noticed he was wearing a cloak. He spurted “blue flame” at her so she couldn’t see.

It was said she dropped to the ground and was seized with violent fits that continued for a few hours.

Jack has never been caught and the fact that he was extraordinary leaping abilities are attributed to him remaining at large. Many believe that he has paranormal explanations.

Skeptics, of course, dismiss the stories of him as urban legends such as the boogeyman.