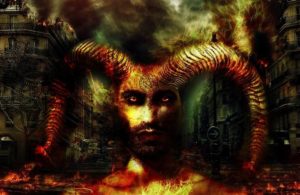 Some forms of entities are manipulative, and can easily show you an army of faces in order to terrify you or even get you to move house. Simply because they’re deceptive, nevertheless, does not exactly mean that they’re demonic. A demonic possession, for example, is not as frequent an event as the media would have you believe. In fact, it is incredibly rare.

The rareness among these events may in fact be the reason why movie-makers so enjoy creating horrific screenplays of possession and exorcism and demonic mayhem (read: The Exorcist, Legion, etc. etc.). It’s a truly frightening situation to think about: Having your human, fragile body taken over by an entity whose sole life’s work is to create the very Hell on Earth that frightens all human beings.

But if everybody in the world had a demon possessing them, there would be so much chaos that no control could ever be regained. The apocalypse would easier be made up of a humankind utterly possessed than the idea that the planet might implode or be incinerated by a vengeful God, which, by the way, is rather impossible, especially given his covenant with his people after the Biblical floods.

The most of possessions are more well known as spirit-possessions. They are possessions brought about by human or nature spirits, natural spirits born of natural heritage. These types of spirits are often just looking for an outlet to communicate with the living, and sometimes they just do not know any other way to do so other than “using” a super-sensitive living person to speak or move. Since the mass media has most people pretty well convinced that the only spirits who would possess a person are demonic in nature, it’s necessary to provide some information on what classifies a demonic and what classifies a human spirit with certain strengths and abilities.

We can repeat: Demonic possession is extremely RARE. Its exact strength can be heavily fictionalized and aggressively exaggerated to fit the media’s ideal so easily that we forget to try and actually rationalize the true events. Even in “The Exorcism of Emily Rose,” which is meant to be based on the real-life possession of Anneliese Michel, the truth of things were twisted to fit the film. Anneliese’s case occurred in the seventies; she was already heavily indoctrinized in the Catholic faith, and so if she was actually suffering from a brain disorder of a sort, or a mental disease such as schizophrenia, she would have relied far more on her faith than any doctor’s diagnosis.

There is some evidence that shows she was suffering from real depression at some point during her late teens. Even during the exorcism sessions (sixty-seven of them, to be precise), she had been prescribed anti-psychotic drugs, although we cannot prove whether she faithfully took them or not. So many possessions that we see in modern-day society tend to be driven more by schizophrenia and mental psychosis than an actual demonic entity, especially in places that don’t have access to mental health care or mental health awareness programs.

Most classifications of genuine demonic possession include the victim’s randomized glossalalia and gnosis; glossalalia is speaking in tongues and gnosis is access to hidden knowledge. More classifications include the appearance of sudden scratches or burns or bruises, drastic changes in vocal intonation, and loss of control and personality. (Most information here is from Wikipedia’s Wiki on demonic possession.) The majority of spirit possessions only involve manipulation of vocal cords at the least. Sometimes, though, a negative spirit taking possession might leave a few marks on the skin that don’t last very long. Demonic possessions often include marks on the skin that stay for hours or even days, sometimes longer. The one major thing that these two types of possessions have is that they are rare.

We hear a lot of sensationalized stories that have been added to and partially fabricated by Hollywood for the purpose of telling a seriously scary story in the cinemas. “The Exorcist,” “The Exorcism of Emily Rose,” and other such films portray a true story down to their bare bones, but most likely, much of what you’ll see in the film is movie gloss. We put more fear in these stories than there should be.

Most spirit possessions happen to people who delve deeper into the spirit realm than most – I have done a lot of delving, so I have had experiences that others have not had – or to people who mess around with things they simply shouldn’t mess around with, especially if they don’t have a deep and complete understanding of how to deal with the consequences should something go awry. Examples of this are playing with portals such as the Ouija board (which I will repeat from previous posts are not toys, no matter how they’re packaged), or inviting spirits in – Bloody Mary is a childhood example that terrified me.

I have had experiences with some spirits that were later proven to have had a mental disorder, a psychopathic or sociopathic nature, or something similar during their lives. These entities have chaotic natures and are often incredibly unpredictable and therefore dangerous to deal with. Aggressive spirits do not respond well to interaction with the living, because they perceive threats in the least threatening behavior possible, and feel that they need to protect their property or their families, even if their families are already long gone, like the spirits themselves.

These entities have the easiest comparison with demonic entities because their natures are similar – but often the “haunting schedule-” or the events that comprise the haunting or demonic oppression/possession – are different when it comes to intensity. Demonic entities tend to have extremely obsessive natures and do not let up even when told to stop – most aggressive spirits don’t have much more power in a situation where a living person puts their foot down and tells them that they do not have permission to harass or to stay in the building – and they are far more sadistic in nature as well.

I have personally been spirit-possessed a single time. I remember nothing of the day at all. It is literally a complete blank. Apparently, however, according to my roommates of the time, I was not aggressive at all. Instead, I simply laid myself down on the living room couch and stared at a point on the floor for nearly eight hours. A lethargic ghost? To this day I don’t know who it was or why it happened, but I know that the spirit did not respond, did not allow me to respond, and did not allow me to wake up. I know I terrified my roommates and that my then-fiance couldn’t understand why I wouldn’t respond to his questions. I can probably very safely say that demonic possession is nothing like that. Considering I have seen several spirit possessions firsthand, and they are not nearly as terrible, terrifying, and violent as reported demonic possessions, I am very happy to never have encountered a true demonic possession personally.

Often the only reason a spirit will possess a living person is to gain the temporary ability to speak and move normally. A demonic possession comes about because the entity wants to poison and control and hurt someone. Most human spirits do not have the intention to harm, while the only real reason for the existence of demons is for harm. They are of entirely different realms, entirely different worlds. Spirits exist simultaneously in our world and their own veiled place. Demons are not meant to even walk the earth. They lash out for no reason – spirits are like wounded animals, with only an instinct to guide them through the dark; they lash out if they feel threatened, and they are not threatened by very much.

We can really only guess at the majority of a demonic nature, because there isn’t altogether too much known about them. After all, most paranormal investigation stems from spirit contact, rather than demonic contact. There are demonologists, true, but I am not one of them. I write this post based on a bit of research and some of my personal experiences; both fortunately and unfortunately, I have never witnessed or experienced a demonic possession, and so therefore the only experience I have is with spirit-possession. Either way, being controlled by something other than yourself is incredibly scary and disorienting; it seems to cloud your own senses for a few days (or longer) after you wake up into yourself. It must be far worse waking up from demonic possession – especially if such an experience can actually kill you if it goes on for long enough!

I hope that we can make some strides into figuring out demonic possession as a whole. Yes, some of it can actually be psychological, but for the most part, genuine demonic possession is an event that is incredibly unpredictable and terrifying for everyone involved – and it can be fatal. It is not as easily rid of a condition as spirit-possession. It can go on for years or months or days. Most spirit-possessions only last a few minutes or hours, depending on the strength of both the spirit and the living, and also the circumstances surrounding it and the people around the living.

Author: Aly Vanderboegh
Aly Vanderboegh is the case manager for Omaha Paranormal Research and founder of The Average Sensitive, a paranormal web-site and blog serving as a connection point between people experiencing paranormal sensitivity and activity. She has also authored two novels and a series of paranormal topic pamphlets, published to the Kindle on Amazon. You can visit her site at: theaveragesensitive.blogspot.com.au