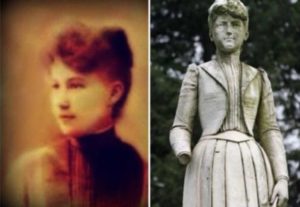 Most people don’t give much thought to what happens to a corpse once it’s buried. Into the coffin it goes, the lid is locked tight, and it’s covered with dirt, out of sight, out of mind. But what happens if the person inside that coffin wasn’t really dead?

Imagine, if you can, waking up on a satin pillow to find the air running out, your body laid in a box so small that you can barely turn over. As panic builds and hope wanes, you try your hardest to free yourself, only to realize that, much like a corpse, you’ve been buried and forgotten, left to suffocate in the dark.

Octavia Thatcher is the subject of one such story, and unfortunately it is based on FACTS.

Pikeville, Kentucky, sits in Pike County, an area famous for the longstanding bloody feud between the Hatfield and McCoy families. Rich in timber and coal, it was the kind of place where the right person could begin a legacy. Such a person was James Hatcher, who, at 18, entered into business with a warehouse and worked for the next sixty-two years to build a comfortable life for himself.

By the time he was thirty, he’d already built a considerable fortune, and he believed his life was to be of the storybook variety when he married Octavia, a young woman whose family was among the first settlers of the town. Their marriage only lasted two years, ruining any illusions of a storybook life.

In 1891, Octavia gave birth to the couple’s only child, a son they named Jacob after her father. But the baby was born ill and only lived for a few days. Devastated, Octavia developed depression and soon took to her bed, sleeping her melancholy away.

Four months after the death of her son, Octavia grew increasingly ill and soon slipped into a coma. Doctors came and, on May 2nd, pronounced her dead of an unknown illness.

Because of the unbearable heat of the season, James put through the order to have the funeral service and burial immediately so her body would not be affected by the heat. But he did the deed so quickly that there was no time to have her embalmed. He buried her in the family plot.

Several days after the funeral others began showing the same symptoms as Octavia, many slipping into a deep sleep that was, at first, thought to be a coma. Doctors soon determined that it was a strange sleeping sickness, caused by the bite of an odd sort of fly. When James heard the news, he panicked.

He raced to the cemetery, where an emergency exhumation of Octavia’s grave was already under way. When they opened the casket, their worst fears were confirmed. The lining of the coffin lid was shredded, and there were fingernails embedded in the wood. Her face was scratched and locked in a perpetual scream, and her bloodied hands were frozen in claw-like poses.

James was devastated. He re-buried his wife and bought a monument of her likeness to stand over her grave. It is a woman holding the baby in death that she never got to hold in life.

Those who live on the hill by the Pikesville Cemetery tell many stories, and most of them are about the grave of Octavia Hatcher. Most often, residents hear the sounds of a woman weeping near her grave, sometimes accompanied by a baby crying, late at night when the cemetery is closed and empty of living people.

There have also been reports of strange blue lights near her grave and a swirling mist that seems to stand only at the foot of her statue. Other witnesses claim to experience feelings of sadness or terror when standing at her marker.

Over the years, the story of Octavia’s tragic death was told and re-told, with minor details changing and others being left out. In one version, she died while still pregnant, and mourners at the gravesite heard the baby cry from within the coffin.

While not true, it’s one of the earmarks of an urban legend that it changes with each retelling. A glance at her baby’s headstone, however, proves that he preceded her in death by a few months.

In the 1990’s, discouraged by vandals who’d broken the baby out of the statue’s arms, the Hatcher family put a fence around Octavia’s grave. Also, to separate fact from fiction, they put a stone monument in the cemetery that tells Octavia’s true story.

Still, Octavia’s name is talked about often in Pikesville, and her legend grows. And with every telling, there is someone who swears to have seen her restless ghost.

The Pikeville Cemetery, and Octavia’s grave, is open to the public and can be seen any time of the year. However, it is in the month of May when most sightings occur.

The folks who live on the hill near the cemetery do keep a watchful eye out for vandals and would-be partiers, so when visiting, remember to treat the dead with respect.

By Scott A. Johnson, source: dreadcentral.com