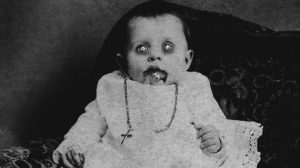 Legend says seeing a radiant boy is an omen of death or misfortune; however, some documented sightings refute this. Most of the recorded encounters happened in England.

Seeing radiant boys, golden-haired specters glowing in darkness, may be an omen of misfortune or death, according to different traditions.

It’s speculated the belief originated in Germany with the “Kindermorderinn,” children whose mothers murdered them, and were brought to Northumberland and Cumberland, English counties originally settled by Germans, where most sightings are documented.

This Cumberland manor house, ancestral Howard home, was haunted by a radiant boy. He had been frequently observed in “the haunted room.”

The Rector of Greystroke and his wife planned on spending several days at Corby and were given the haunted bedroom. The sighting occurred on September 8, 1803. The couple left that morning. Eventually, the clergyman told the Howards the reason for their unexpected departure.

He woke around 1:30 AM and saw the fire had died. There was a glimmer in the room which turned into a shining flame. He saw a golden-haired boy, dressed in white, by the bed. The apparition glided toward the chimney and disappeared.

It’s not known if the rector experienced misfortune; however, he still talked about the experience 20 years later. This was the last appearance of the radiant boy.

The Blue Boy haunted this Northumberland edifice’s Pink Room. Agonized shrieks of a child were heard at midnight by a passage leading through a 10-foot thick wall into the adjacent tower.

As the cries died away, a bright halo of light formed. The apparition of a young boy, clad in blue, surrounded by the aura of light would approach the bed.

During the 1920s, skeletons of a man and a young boy with fragments of blue cloth were found. The radiant boy hasn’t been seen since his remains were buried in consecrated earth, although some Pink Room guests have reported seeing flashes of blue light during nighttime hours on a certain wall. The wall isn’t wired for electricity.

Captain Robert Stewart, second son of the Marquis of Londonderry, later famous as English statesman Viscount Castlereagh, saw the ominous specter. While he was hunting in Ireland, a lightning storm broke. He found haven in a local manor house.

His room, a large one with a fireplace, had an unsettling aura, but Steward was tired and quickly fell asleep. He woke up about two hours later and noticed the fire was extinguished. He saw a bright light in the shape of a golden-haired boy near the hearth. At first he was frightened, then suspicious. Steward became angry, thinking it was a practical joke..

When he told his host about the incident, the man asked the butler which room had been given to the captain. The servant told him it was the “boy’s room,” but he lit a fire to keep the child away.

Years before, the boy’s mother murdered him in that room. His ghost had been sighted before and was deemed an omen of power and prosperity followed by death during a zenith.

Steward scoffed at this. He wouldn’t inherit Londonderry. His older brother, the heir, was in good health. A few days after the sighting, the brother drowned, making Steward the wealthy heir to family fortunes and title.

As Viscount, he was active in politics and amassed power. By 1822, his mental state had greatly deteriorated. He became paranoid, believing people were plotting against him, and committed suicide on August 12th.

The Tale Of The Ghost Who Helped With Math