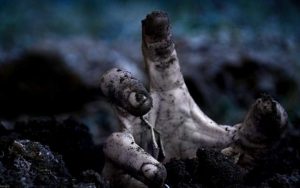 In the cemetery Charles Resurrection Cemetery in the town of Farmingdale, a suburb of New York, an incident happened as if descending from a horror movie screen. Joanne Cullen visited the grave of her parents in Long Island when she was swallowed up by the ground.

A 64-year-old from North Bellmore leaned over to fix a bow on a wreath beside a headstone when a sinkhole opened beneath her, causing her to fall to the ground to the waist.

She also fell forward as the hole opened, hitting her head and cracking a tooth on the tombstone.

The woman screamed desperately, but that evening nobody was in the cemetery and nobody heard her. Besides, it was already dark and nobody saw her either.

“Being dragged into the grave of your parents when you go to visit them on a cold December day … it’s very scary and traumatic.” – lawyer Joan Joseph Perrino reports.

Joan managed to escape only by some miracle, clinging to the tombstone with her hands, she began to pull herself up a little and somehow got out of the pit-trap.

“I will never come there again,” Joan Cullen said through her lawyer, adding that she had a phobia of open spaces because of all the experiences and that she was still tormented by nightmares and headaches.

According to the lawyer, the underground pit was formed due to the fault of the grave-diggers, who were poorly covered with earth by one of the coffins of Joan’s parents.

“This is outrageous negligence and we want not only compensation, but also that they learn a lesson from this and this does not happen again with anyone else,” Perrino sums up.