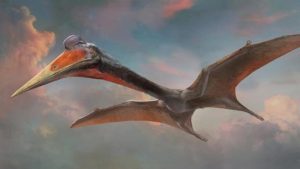 This giant creature, which flew through the Cretaceous skies more than 76 million years ago, was named Cryodrakon boreas, meaning’ frozen dragon of the north.’ Originally found in Southern Alberta’s Dinosaur Provincial Park 30 years ago, the partial skeleton was mistaken for another genus of pterosaurs until very recently when a new study eventually allowed specialists to recognize it.

This huge flying reptile, measuring 9 feet tall and weighing 250 kg, would probably have feasted on almost everyone, including tiny dinosaurs.

Its wingspan of 33 ft-which would have made it comparable in size to a tiny aircraft-is nearly three times that of the wandering albatross with the biggest known wingspan of any living bird.

“These are among the most popular and charismatic of all fossil animals,” said Michael Habib from the Natural History Museum of Los Angeles.

“They have been inspiration for countless movie monsters, they were critical parts of global ecosystems worldwide during the age of dinosaurs, so they are key to understanding the ecology and extinctions of that time.”

“Just like flying animals today, [they] could carry important clues about how animals at the time responded to major changes in climate.”