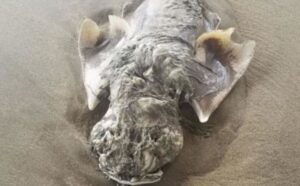 Kenny Harris, 42, will forever remember his North Carolina vacation. On one of the local beaches, he found the half-decomposed body of an unknown marine life. It looked like a gargoyle. For a West Virginia resident, such a find was a real shock, reports mirror.co.uk.

Kenny photographed the found body on a smartphone and posted it on social networks. The man wanted to know who the remains of the monster might belong to. The picture immediately collected hundreds of comments.

One man who works for a long time on that beach wrote that he had never seen anything like it before.

Later Kenny found the answer to his question, it turned out that the corpse belongs to an angel shark. This fish species is endangered.

Previously, they were often found in the Atlantic, Black and Mediterranean Seas. In the 1980s, their numbers declined sharply due to the development of fishing.

Kenny most likely discovered the troupe of Squatina Dumerville, better known as the Sand Devil.

This species spends most of its life on the ocean floor, waiting for prey. They feed on carrion and are not considered aggressive. The approximate number of individuals is unknown, therefore, oceanologists and biologists cannot answer exactly how great the threat of extinction is.