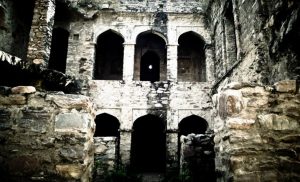 Buried away in the Alwar district of India you’ll find a small town that not only holds the distinction of being the most cursed place on the planet, but it is also thanks to that curse, and thanks to the black priest that placed the curse, the most haunted location on the planet. Welcome to Bhangarh…

When one thinks of curses they generally think of voodoo or even the witches of 1800s America. India is rarely known for black magic, but it is in fact a major component of the culture and has been for thousands of years.

Legend tells that five hundred years ago the town of Bhangarh was nothing but a fertile land with numerous streams and rolling hills. Despite that, it was home to a dark priest in the arts of ‘Tantrik’, and ‘Baba’ named Balu Nath.

When Madho Singh, the younger brother of Emperor Akbar’s general arrived on the lands to begin construction of the Bhangarh Fort and the surrounding town, Balu Nath was not happy about it.

The town and fort of Bhangarh were founded in 1573 on a strict warning from the tantric priest, “The moment the shadows of your palaces touch me, the city shall be no more”.

That day inevitably came when the general’s son died in 1630 and his replacement ordered the construction of two additional towers to Bhangarh Fort, two towers whose shadows would graze the home of Balu Nath.

By the 1700s the whole of Bhangarh was a ghost town in a very literal sense. The curse was much more than the destruction of the town – it included that all those who would perish in the town would be held there forever without peace.

It began with drought, the water throughout the region stopped flowing, despite the many rivers. First the crops would not grow, the sun glared hotter than any in the region had known, and while this may have been a natural phenomenon, all of the town’s roofs collapsing was certainly not.

With no food, little water, and no shelter from the Indian sun the population of Bhangarh was dying by the hundreds per day.

Those influential or affluent enough were able to gain access to Bhangarh Fort and its cool subterranean passages, but this only served to prolong their death. When the military reserves of food began to run low the lesser ranks of the militia mutinied killing all who were above them.

The militia was the last to go, malnourished and trapped in Bhangarh Fort with no water, they died of dehydration soon after and at last fulfilled Balu Nath’s curse.

Unlike the authorities of other cursed locations such as Lokrum Island, the Indian government had the good sense to never again settle Bhangarh. Despite its numerous homes, which still stand, albeit roofless, the town is as vacant as the day the last of the militia died.

However, in the 1800s India would lose rule over their lands to the British and the infamy of Bhangarh was not taken seriously by the new rulers. Travel to the ghost town of Bhangarh Fort became trendy amongst British troops during the British Raj.

The British ruled over India between 1858 and 1947, and it’s during this time that we learn the true power of the curse.

Not only would visitors to Bhangarh vanish during the night, but future visitors would report seeing the ghostly figures of their missing friends and fellow soldiers walking the roads at dusk. Today the Indian government has once again regained independence and control over their lands.

The new Indian government may be more modern and less superstitious than their predecessors in the late 1700s, but that doesn’t mean they’re foolish.

Bhangarh is for the most part unpatrolled and unguarded, so those daring enough to travel to the ghost town won’t find much resistance to entering, but they will find the town surrounded by signs that translate roughly as “Entering the borders of Bhangarh before sunrise and after sunset is strictly prohibited. Legal action would be taken against anybody who does not follow these instructions.”

Almost five hundred years later the curse of Bhangarh is as strong as the day the shadows of the two towers touched Balu Nath, and should you fall victim to it, expect to spend a very long time in the town of ghosts.

Mysterious Disappearance of 30 Children Inside The Hal Saflieni Hypogeum