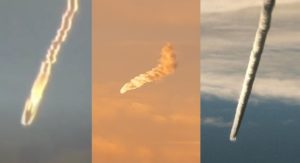 Something strange is going on. Last week many people around the world witnessed slow-moving flaming objects that fell from the skies, reports ufosightingshotspot.blogspot.com.

Experts believe the unusual occurrences were meteors, potentially linked to the annual Lyrid meteor shower due to commence this week, but looking at these unusual flaming objects then it is hard to imagine that they all were linked to the Lyrid Meteor shower.

A flaming object falls from the sky and although the location is unknown, we can see a v-shaped object with a burning trail behind.

And another very strange smoking object that fell from the sky over Iceland on April 14, 2020. 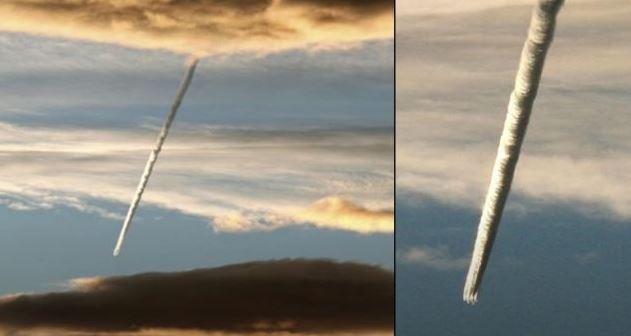 The bright flaming object falls from the sky over Iowa

US National Weather Service Des Moines Iowa wrote on their Facebook page: “Does anyone know what happened this morning (April 21, 20200 around 6:20 am in the sky looking East. I was on my way to Pella when I noticed the “explosion”. It looks like an explosion of some sort. I would hate to think of an airplane but I’m not sure what else it would be. You can see a dark streak then a big poof a smoke and a bright object falling. I know there is a meteor shower tonight… maybe this one is a bit premature?”

On Sunday evening (April 19, 2020), a mysterious burning object was spotted traversing the sky over the northern part of Kingston-upon-Hull, East Yorkshire, England. Eyewitnesses suggested that the object moved too slowly to be a meteor.

Rebecca Holmes saw it from her garden in Bransholme, near Kingston upon Hull and said ‘It was weird it looked like either a plane or a rocket or something.’

Mysterious Flaming Object Spotted Over Cambridgeshire England A mysterious flaming object spiraling through the sky over Cambridgeshire, England, was spotted by witness this past Wednesday (April 15, 2020)at 8:00 PM. The witnesses described the sight as appearing as a thick chemtrail but with “flames coming out of the back of it.

And a burning object falling from the sky over Winnipeg, Manitoba, Canada on April 14, 2020 and reported to Mufon. The witness states: “Driving into Winnipeg at around 8:30 in the morning on April 14 There was a big black streak in the sky, not moving. I thought it was a contrail at first, but it had no beginning or end and no sign that it was dissipating. It just hung there for about 15 min then it was gone.”

What is falling from the sky? Why is the government silent about this? There are no official answers yet.