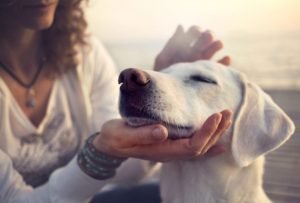 Cats and dogs seem to know instinctively what their owners will do or say as if the four-legged, furry animals are clairvoyant.

And what about the reaction of pets that mystifies their owners? Many cats are known to disappear when their owners are ready to put them in a cat carrier for an annual checkup with their veterinarian. Dogs sit with their tails wagging feverishly or walk around in circles as if to say,” Come on, it’s time to take me for a walk.”

An animal’s telepathy usually occurs when there are close, emotional bonds between them and the people with whom they share a special relationship, points out Rupert Sheldrake in an article, entitled “Dogs That Know When Their Owners Are Coming Home and Other Unexplained Powers of Animals”. The article was published in the Spring 2003 issue of New Renaissance Magazine.

Sheldrake, an English biochemist and plant physiologist, admits that what cats and dogs do could be merely a routine response. If that’s the case, then why does a cat lick or cuddle its owner when the person is upset or feeling ill?

This isn’t regular behavior on the part of the owner, and yet a cat seems to know that what the person needs is tender loving care.

Dogs will react in a similar way with their owner. If their master is sitting and appears tired or depressed, a dog will put his head on the person’s lap as if to comfort him. Is it telepathy or just a sense on the dog’s part that he may make the person feel a little bit better?

Cats and dogs seem to have the uncanny ability to find their way home after being away for long periods of time. It’s as if they knew the direction they should follow. And yet, the path may not be one they have taken before.

Homing pigeons also have a good sense of direction. They are able to fly great distances over unknown land and then return to their loft without any difficulty.

Sheldrake noted in his article that there hasn’t been enough research to explain an animal’s premonition when it comes to earthquakes and storms. It could be the electrical changes in the natural phenomenon, although that is an assumption and not fact.

Clairvoyance Testified to in Anecdotes

Dr. Sheldrake worked from anecdotal accounts of household pets appearing to have predictive abilities. He interviewed more than 1,000 people ranging from veterinarians to horse trainers, and from pet owners to zookeepers. What he heard were difficult to explain stories:

– Dogs and cats showing an emotional response to the death or suffering of their owners, sometimes when separated from them;
– Lost animals being able to find their way home over large distances in unfamiliar territory;
– Household pets appearing to sense the return of an owner long before they could see or hear them.

From the weight of anecdotal evidence, Dr. Sheldrake came to the conclusion that there can be extrasensory perception exchanges between humans and animals.

One of the stories in his book tells of the owner of a Springer spaniel who had decided to take their own life. As the person was about to overdose on pills, the dog jumped onto its owner’s lap snarling with teeth bared. The person was shocked by the spaniel’s behaviour and put down the pill bottle. The dog then started licking the owner’s face.

Sheldrake says this and many, many other anecdotes strongly suggest a form of communication between species.

Here’s how he describes it in his book: “Natural systems, or morphic units, at all levels of complexity are animated, organized, and coordinated by morphic fields, which contain an inherent memory. Natural systems inherit this collective memory from all previous things of their kind by a process called morphic resonance, with the result that patterns of development and behaviour become increasingly habitual through repetition.”

He says this collective memory and connection explains why all the members of a flock or birds or a school of fish can change direction at exactly the same moment. What the actual mechanism for this communication is, he says remains to be explained.

When Dr. Sheldrake asserted that some pets do in fact anticipate the return home of their owners he became the subject of some ridicule among scientific colleagues. His ideas have received a warmer welcome in the non-scientific community.

Alex Tsakiris, the California-based host of the Skeptico podcast, is trying to run an experiment that will confirm or refute Dr. Sheldrake’s hypothesis.

Reporting on the study in the May 19, 2009 issue of The Globe and Mail, Rebecca Dube wrote that webcams are set up in a pet owner’s home aimed at the place where their dog usually waits for them to return.

“Reviewing the webcam footage later, Mr. Tsakiris computes how much time the dog spent over all in the waiting place during the owner’s absence, and how much time it spent there during the ‘return time’ – the 20 minutes or so before the person arrived home.”

Bond Between Owner and Pet

When it comes to a close, emotional bond between an owner and a cat or dog, telepathy plays an important part in the way in which human and animals react to one another’s actions.

Animals in the wild use telepathy as their way to communicate with one another, Sheldrake explains. The emotional bonding between owner and pet creates a natural sixth sense for both.

Owners may sense when their pet is sick or dying without examining the animal, but they can’t explain how they know. Sheldrake believes humans have telepathic abilities. However, the more educated people are, the more likely they lose what natural ability they have to know intuitively what is wrong with their pet.

Cats and dogs may have psychic tendencies that go beyond human comprehension. Further research may help in understanding the inner abilities of these and other animals that share their lives with humans.