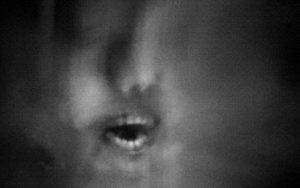 There was a man named John Willy who lived on Taylor Town Road. He had gone deer hunting earlier in the day and had killed a nice buck. He had gutted him and had him hanging high from a large tree in the back of his home. The guts had been placed in a wash tub and was sitting out near the woods to be disposed of later.

That night was rather cool and the man was restless; he grabbed his guitar and was sitting out on his front porch strumming quietly. He was known in the area for having some excellent dogs. He had them penned up behind his home as well.

As he sat quietly playing the guitar, an uneasy feeling came over him. Something was wrong, but he couldn’t place what it was. He stopped playing and just sat listening. He realized there was no sound other than his breathing.

The crickets and frogs and all the night creatures had stopped moving. There was dead silence. Suddenly, the dogs came running from around the back of the house. This was strange because he knew they were locked up tight. There was no way they could have gotten out.

He laid his guitar down beside him, and started to get up. Upon further inspection he saw that his hunting dogs had their tails tucked under their bodies. They went straight to the opening that leads under the house. He looked in the direction from which they had come and suddenly their appeared the most horrible thing he had ever seen.

The street light illuminated a creature that was nearly as tall as the basketball goal. It had long white stringy hair. No sooner had he seen it than it let out a cry like a baby that grew in intensity. The hair on the back of his neck was standing on end.

The scream was now a high pitch. The thing was after his dogs and was headed straight for him. He was frozen in fear. He tried to move but his body was as if he were paralyzed. The white creature was moving toward him slowly at first.

Then his greatest fear was realized, the creature stopped and looked straight at him. At this point he knew if he didn’t move this thing would be on him in a matter of seconds.

John could hear the creature as it leaped for the porch. It apparently hit the railing and stumbled, giving him time to get to the door. He pushed the door open and rushed inside. He could hear the hoofs strapping the wooden boards of the porch, as the creature scrambled to get up.

He was trying to close the door but realized the rug was in the door keeping it from closing. He kept pushing, the muscles in his body were trembling from the force he was using. All the while, the noise outside the door was getting closer.

He took his foot and started pulling on the rug as he lessened the pressure he was putting on the door. The door finally closed and he clicked the lock. He no more than turned the lock than the creatures claws started scraping across the wood. There was a small window in the top of the door. John looked to see the creature was looking back at him.

The screams he heard were rattling the glass in every window. The creature was trying to get in. All night long it paced back and forth across the porch stopping at windows slashing the screens with its claws.

The white creature had hooves on its hind legs and stood upright and walked around, it could also walk on all fours using its almost human looking hands with razor sharp claws. The eyes he noticed were red.

His family was upstairs sleeping soundly. He didn’t know why they didn’t hear the screams and come to investigate. He sat in the front room all night holding his rifle waiting for the creature to find a way to get in. As the sun started to come up, he realized he didn’t hear anything. All was quiet.

He waited until the sun was up and went out with his rifle in hand to investigate. On the porch he found pieces of the screens that had been ripped from his windows. His guitar was found unharmed, but had a slimy substance on it as if the creature had picked it up and laid it aside.

Upon further investigation he saw hoof prints where the creature had entered his yard. The hoof prints lead up to the deer that had once been hanging from the tree.

The wash tub was later found deep in the woods licked clean. The pen where his dogs had been kept had been ripped apart from the top. He found where the animals had dug under on the opposite side barely making their escape from certain death.

He feels the smell of the deer and the tub of guts may have led the creature to his home. The dogs must have sensed the danger as they saw it come up and take the deer. They began their dig and barely reached safety before it reached them. The creature might have made more of an effort to reach the man and animals had it not already eaten the deer.

John Willy still lives in his home, his children are grown and have since left. Although that night always stays in his mind, he has not seen the creature now known as the white screamer again.