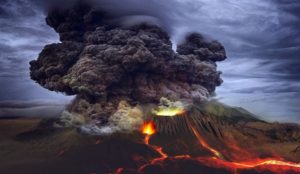 Researchers from the United States said, no matter how hard mankind tries, in the future it will not be able to prevent the eruption of the Yellowstone supervolcano. Such conclusions were made by scientists based on the results of many years of research.

Scientists know that the Yellowstone volcano caldera was formed as a result of three catastrophic eruptions, the last of which occurred about 630 thousand years ago.

Currently, the seismic area is under constant surveillance by the US Geological Survey USGS.

Geological scientist Jefferson Hungerford believes that preventing the eruption of a supervolcano is possible only if all the energy can be pumped out of it. Currently, humanity does not have such technologies that would allow to carry out this incredible procedure.

Despite the fact that clear “signals” from the volcano have not yet been received, experts fear that simple observation of the seismic zone will not be enough. It is necessary to think in advance how to reduce the possible damage from the impending disaster.

Scientists cannot yet say exactly when this might happen. In their opinion, the eruption could begin in ten years or ten thousand years.