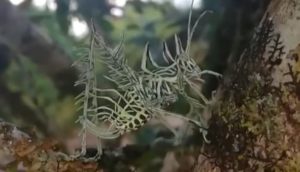 Costa Rica resident Antonieta Mora came across a strange arachnid creature that was hiding behind tree branches in the forest.

“I was cutting fruits to make a fresh drink and suddenly I saw it,” woman said.

But as it turned out later – it was not the first and not the second.

Fortunately, she managed to capture a strange creature in the video. She later posted it on Facebook where a scientist determined the type of insect.

In fact, the cricket Markia espinachi turned out to be a mysterious creature. And its wand-like appearance serves as an excellent disguise, which helps to hide from predators in the natural environment.