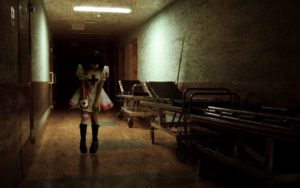 You might not expect it, but doctors, nurses, and other hospital workers see some scary things and have some horrifying stories. These stories from doctors, medical staff, and psychiatric workers about patients (dead or alive) that we found over at AskReddit will keep you up at night.

“I work as an ICU nurse. A mid-20s female came in with some serious cardiac abnormalities and then went into respiratory distress. Never had any medical history at all. We had to put her on the ventilator, but she was on just enough sedation to keep her lucid. She could nod/shake her head yes and no appropriately to questions.

One night, the patient in the room next to hers died, but the body was still in the room about to be taken to the morgue. The female patient’s door was closed with curtains drawn, so she couldn’t have seen what was going on next door. When I went in to check on her, she had a look of sheer panic on her face, trembling. I asked her a series of questions to see if she was cold/hot/in pain/etc. and she denied all. I asked her if she saw something—she started to aggressively nod her head YES. She wasn’t on any drugs that would make her hallucinate. I went on to get details on what this thing looked like. After playing 20 questions I got this: a man, pale white, left arm missing, heavy, bald, standing still, behind me. This was the man who had just died next door.

I spent the rest of the night consoling her.” – whites42

“When I was on an ER rotation during med school we got a call about a 23-year-old woman who was shot in the head, and who was already completely gone, but was reportedly five months pregnant so they were doing CPR until they got her to the hospital to see if the baby was viable. They got her to the ER and did an ultrasound and turned out the baby was full-term so they did a C-section in like under a minute and got the baby out.

I don’t think it’s so incredibly uncommon but it was pretty surreal to see a baby delivered from a dead person with their brain exposed and she was pretty close to the same age I was at the time.” – bluegraypurple

“When I was a student, I got called in on a stroke patient. She had coded and they were doing CPR. They worked for 45 minutes, but she died. They cleaned her up, and called on the family to say goodbye, but by that time the family left. She had been both brain dead and without a pulse for more than 45 minutes. Blood had filled her brain, and she was completely grey and started to smell. Suddenly, she sat up, and called for her family. The nurses rushed to get monitors and equipment back on her. They started working on her again, she stabilized, said goodbye to her family, and promptly died a second time.” – simplesimon6262

“When I was in trauma surgery in upstate by, got a notification about a man who was shot 3 times in the head. He comes in, literally one eye hanging out of the socket, blood everywhere, and he’s slumped forward. Apparently, he was shot in the temple, exited out his right eye socket, in the nose exited from the roof of the mouth, and In the cheek one with exit from the side of the head.

At this point, I’m thinking they just brought him in so we can pronounce him in the ER because he looked dead. I go to examine him and tilt his head back, and he says ‘Yoooo be gentle!’ I jump back and scream like a little boy, as did everyone in the room. Literally, the bullets missed his brain in every single shot.” – Noimnotonacid

“One of the aides I work with said she was doing postmortem care on a patient who had been on many, many anticoagulants before death. She said when they turned her on her side she started bleeding out of every orifice—eyes, nose, mouth, and ears. She said her and the nurse went home and had nightmares for a week.” – sparklingbluelight

“My town has two really old hospitals. One no longer functions overnight, and the stories are unsettling. No one cleans the old ER alone because all the lights and call bells go off. On other floors, there’s a kid with his ball, a lady in a white dress, etc. A coworker was cleaning an entire floor utterly solo (the norm) and bounced between rooms because the cleaning solution stays wet for a few minutes. Upon returning to a freshly wiped bed, hand prints were clearly visible.” – Sapphire_Starr

“I used to do home care for an elderly lady with learning disabilities and no eyes (they were removed due to a congenital condition). She was lovely but prone to wandering around her flat at night in total silence, which led to several horrifying situations where I left my room at 2 am only to encounter her standing silently in the hallway, turning her eyeless face towards me.” – NovelistResearcher

“One call that will always haunt me was on an unresponsive female at around three in the morning. We get there and do some pointless CPR along with the fire department… She had been dead for a while; no shockable rhythm, and clear rigor mortis. The most disturbing part was that the original caller was her 11-year-old daughter, who had just spent three days with her mother’s corpse and called 9-1-1 because she was ‘lonely’. It also didn’t help that the victim was completely naked when we arrived.” – CupofJoe776

“I have quite a few stories, most of them are hilarious and then there are those you never want to think about. What fucked me up the most was when I saw how eyes change at the moment of death. Imagine you are looking at clear water but that clear water changes to foggy in an instant. In my 8 years here I’ve only seen this once, and I’ve personally seen well over 250 dead or dying people.” – ImCuden

I work nights in a long-term care facility as a nurse’s assistant. I have two men under my care and both of them are unable to use their call lights. They have severe dementia and debilitating Parkinson’s disease but still, their lights are looped around their bed rail. One night their light came on and I went to answer it already confused and creeped out. I turned it off and left the room. Before I could get two doors up the light came back on. I went in there and both lights were unplugged from the wall and thrown under their beds. I fished them out, plugged them back in and left.

I’ve seen shadows standing over the dying and felt a tap on my shoulder while doing chest compressions so I knew that lady had passed.” – beeoakly

“I’ve had a couple of weird calls. One was a major MVA-head on many, many years ago when we played M.E. as well. We had 2 DOA (husband and spouse) that were killed instantly in a head-on collision. They had a 12-year-old daughter that was in between them and they actually took the impact, saving her life.

While en route, we noticed the husband’s arm had come loose so I went back to re-strap it. As I was doing that, the wife’s arm suddenly fell out as well, and her hand fell into her husband’s. My boss was watching in the rearview mirror and helped clear the way as I ran back into the front. It spooked both of us. Apparently, the couple (mid 30’s), had just found out he was cancer free after his last treatment.” – Anonymous

“I had an old lady come in by ambulance, near death. She was a DNR (do-not-resuscitate), so we weren’t going to do much for her. She didn’t have any family that we could find. The hospital was full, so we had to keep her in the ER for the night.

Again, she was near death. When you’ve seen enough people die, there’s no mistaking it, and she was almost there. Barely responsive; pale, cool, breaths were really irregular, heart rate was up and down, too. We just turned the lights down and kept an eye on her monitor, basically waiting for her to die.

About an hour later, she’s standing at the door of her room. She’d gotten up and put on all her clothes. We were all like, ‘WTF?’ One of the nurses went to check on her, and she said she was hungry. Not knowing really what to make of things, we got her a chair, a bedside table, and went to the cafeteria and got her a tray of food.

She sat there, ate all her food, talked with the staff a little. After about an hour, she told her nurse that she was tired and wanted to lie back down. We helped her back into bed, and within 30 minutes she was dead.” – Anonymous

“Don’t Let me go Back there”

“This woman was clearly struggling mentally. She went into her basement and started sawing at her wrists horizontally with a rusty hacksaw, bleeds a good amount, and then starts walking around the house. She wasn’t dying quick enough, so she sat down in a chair in the middle of the living room, and started going at her wrists again, this time with a pair of scissors.

I was the second person inside the house. It looked like a massacre. We searched the house top to bottom, fully expecting to find multiple dead bodies in there. I’ve never seen so much blood in my life. Every single room had a trail of blood in it.

The woman was found on a chair in the living room. Rigor mortis had contorted her body into a really strange, unnatural pose, and her face was haunting. Literally the stuff of nightmares. Her wrists had huge chunks of skin/veins/muscle missing from them. Saying she slit her wrists is inaccurate. She ripped them to pieces.” – anoncop1

“I work a stroke/telemetry floor on the bought shift. Most of our patients are elderly. Apparently, there are two things that patients see before they pass away. Some will say that two men are walking in their rooms and telling them to get ready to leave. The patient will call and tell us that these men are big and abrasive in their demeanor.

“They are either terrified or annoyed when they see the two men. The other thing they will see is a little boy who will go into their rooms and try to wake them up. The boy is usually loud and runs around their rooms. The patients will call and ask who’s letting children just run around late night. Several nights or even that same shift we’re coding or cleaning the patient for the funeral home to pick up.” – pokfynder