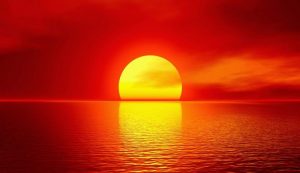 On the World Wide Web spreads mysterious video obtained on December 25 last year in California. Many residents and guests of the “Golden State” then witnessed an extremely strange phenomenon.

During sunset, a semicircular red glow, quite reminiscent of the sun, suddenly appeared near the coast. Nevertheless, the sun, as it is known, sets exclusively on the horizon relative to the observer’s eye, but certainly not in the middle of the ocean.

Some Web users believe that there was a failure in the work of the so-called “Matrix”, where humanity lives. Others claim that it was a phenomenon of a supernatural or divine nature.

If we believe skeptics, it was just a bizarre mirage, when it seems that there is an additional strip of water above the horizon. Other doubts say that this is a regular video editing.

Of course, no one can say with accuracy, but alternative experts are convinced: something happened that goes beyond the ordinary.

Nowadays, when everyone has a phone with a camera in their pocket, such miracles are often captured on video. But what else surprises: these miracles, are becoming more diverse.