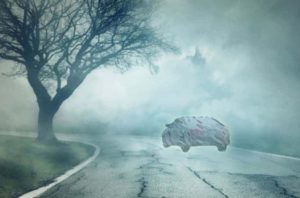 Anomalien.com reader Edward shares his story about an encounter with the unexplainable.

On the night in question, I was driving home from work, having finished the late shift. After closing up shop (at 8 p.m.) I headed for home along the highway. All was normal. After a couple of miles, there’s a junction where I turn off onto another highway for the home stretch. This is where things got a little “strange”.

As I was driving along, I started feeling sickly and got a strong metallic taste in my mouth. I also became aware that I was the only person driving on this road (which for the time of night isn’t rare; it is a quiet highway), but I was extremely aware of how there was just me.

Then a feeling came over me and I can only describe it as pulsating: it felt like the streetlights were pulsating, like when you drive past trees with sunlight shining through — that flickering, but slower.

I looked up at the streetlights and they weren’t flickering or pulsating, but the light coming from those lights into the car was itself pulsating.

After another mile or so, my turnoff came up and I noticed there was another car in front, again like an intense awareness of it. But the car was mine! It was a red Ford Fiesta and it had the exact same license plate!

It gets stranger. As I was driving down this exit ramp, following this car – my car, apparently – it suddenly vanished in front of me! Literally disappeared!

The second it does, however, I looked in my rearview mirror: there was a red Ford Fiesta pulling into the exit lane! As I was focusing in my mirror to try and see the license plate (the headlights were on after all) the car behind me disappeared! Again, it just vanished before my eyes!

I couldn’t comprehend what happened. I went home, a little shaken and a little disturbed. I’m still not sure what happened. I’ve researched and come across “time slips”, but I’m still completely and utterly dumbfounded by it all.

I’m not quite sure what this experience was or why it happened, but it has unsettled me. I’ve been uneasy driving this road since, but it’s left me questioning all sorts. It has thrown me completely.