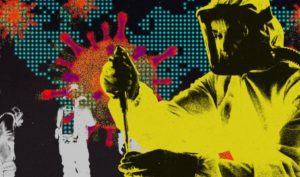 Coronavirus may have been known about two months before the outbreak, after leaders met for a “high-level simulation exercise for pandemic preparedness and response,” according to some reports.

On 18 October 2019, the John Hopkins Center for Health Security organized “Event 201″ in New York in collaboration with the World Economic Forum and the Bill and Melinda Gates Foundation.

The exercise demonstrated places where public and private collaborations are required to diminish large-scale economic and social effects during the response to a severe pandemic.

Conspiracy theorists are claiming the leaders had some kind of prior knowledge, as China did not alert the World Health Organisation (WHO) of the virus until December 31, 2019.

Sean, who runs YouTube channel “The Resistance Movement,” said: “There are too many coincidences. In October, about six weeks before this virus was confirmed they held a tabletop exercise in New York dealing with this exact sort of thing, a pandemic.”

“That was held by the usual suspects, the Bill and Melinda Gates Foundation and the John Hopkins Society.”

“Event 201” hypothetical situation simulates an outbreak of a new zoonotic virus transmitted from bats to pigs to humans, that finally is easily transmissible from person to person, resulting in a serious pandemic.

In the first year there will be no vaccine. The scenario comes to an end at the stage of 18 months, with 65 million deaths when virus was exposed to 95 percent of the world’s population.

What are the chances of creating such a scenario at the same table with the leaders of the world, and actually occurring one month later? Did world leaders know weeks before?