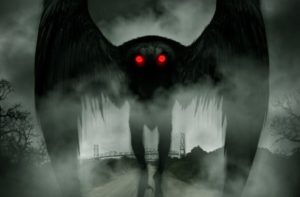 More than a decade before the “Mothman” flew into Point Pleasant, West Virginia, another flying man bat made a brief appearance, in the great state of Texas, Houston to be precise. A report of the strange event was published the next day, June 19th, 1953, in “The Houston Chronicle” newspaper.

The event took place at 118 E. 3rd St. at about 2:30 am. It was a sweltering night at a time that millions of Americans did not have air conditioning. Relief from the heat was often sought on the front porch, as was the case on the night of June 18th. Three neighbors had gathered on the front porch of 23-year-old Hilda Walker. In addition to Mrs. Walker, were 33-year-old Howard Phillips and Judy Meyers, age 14.

As the three passed the time with small talk, Walker glanced toward the street light. She later said “…twenty five feet away I saw a huge shadow across the lawn. I thought at first it was the magnified reflection of a big moth caught in the nearby street light. Then the shadow seemed to bounce upward into a pecan tree. We all looked up. That’s when we saw it.”

What the three saw was described as humanoid and about 6 feet tall. It had large wings, similar to a bat, and appeared to be wearing some type of tight-fitting black suit.

All three of the witnesses also described the thing in the pecan tree as being surrounded by a yellowish glow. When first seen, the glow was quite bright but rapidly began to fade. It was just as the glow went out that a terrified Judy Meyers screamed.

At that moment, the bat winged creature vanished. Mrs. Walker described what happened next, “Immediately afterwards, we heard a loud swoosh over the house tops across the street. It was like the white flash of a torpedo-shaped object… I’ve heard so much about flying saucer stories and I thought all those people telling the stories were crazy, but now I don’t know what to believe. I may be nuts, but I saw it, whatever it was… I sat there stupefied. I was amazed.”

The strange thing seen by the three neighbors was never reported again. But, some years later, another flying nightmare would be seen in Houston. This time, at the home of the American space program, NASA.