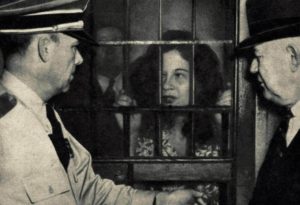 Toni Jo Henry, born Annie McQuiston in 1916, was a drug addict, alcoholic and prostitute. Toni would probably have been long forgotten by now if it were not for the fact that she was the first woman to be executed in the Louisiana electric chair. While the thousands of volts of electricity sent through her body were quite effective in killing her, some who work at the Calcasieu Courthouse in Lake Charles, Louisiana, claim that Toni’s ghost haunts the courthouse to this day.

In 1939, while working as a prostitute in Shreveport, Louisiana, Toni Jo met a man named Claude “Cowboy” Henry. The two were soon married and living in California, things seemed to be looking up for Toni as she reportedly kicked her drug addiction with her new husbands help.

But, Cowboy’s past caught up with him when the couple returned to Louisiana and he was charged with a murder in Texas. It was hard for Toni to be alone and she was soon back on drugs and working as a prostitute to pay the bills. Toni Jo eventually reached the point that she just could not stand to be without Cowboy any longer and hatched a plan to help him escape from the Texas jail where he was being held awaiting trial.

As part of her plan she enlisted the help of a man named Harold Burks and the two set off for Texas. Not having a car, Toni Jo and Burks began hitchhiking and were picked up by a man named Joseph Calloway, the two returned the man’s kindness by murdering him, shooting him in the head, right between the eyes.

Their crime would not stay secret for long as Toni Jo and Burks began drinking and speaking freely about what they had done. What exactly happened depends on who you believe as Toni Jo and Harold Burks accused each other of killing Calloway. Ultimately, Toni Jo was charged with the murder.

Toni Jo Henry was tried for the killing at the Calcasieu Courthouse and found guilty. Her legal battle was for from over however as she appealed the guilty verdict and won a retrial. The second trial did not set her free, as she was again found guilty of the Calloway murder. Incredibly, Toni Jo and her attorneys again appealed the verdict and once again were granted a new trial.

The verdict in Toni Jo’s third trial was the same as the first two, guilty, this time she would not be saved by an appeals court and her execution was scheduled. Toni Jo had originally been sentenced to death by hanging, but by the time the execution was carried out Louisiana had begun to execute prisoners in the electric chair, and Toni Jo Henry was the first woman to take a seat, on November 28th, 1942.

There is a variety of purported paranormal activity at the Calcasieu Courthouse that is attributed Toni Jo’s ghost. Most of the activity centers around malfunctioning office equipment which often turn themselves on and off. There are also reports of disembodied footsteps and the ghostly voice of a woman as well as the smell of the perfume that Toni Jo was known to wear.

Perhaps the strangest phenomena is the smell of burning hair which has been reported in several areas of the courthouse. If the phenomena is real, it may be that Toni Jo Henry is not the only phantom in the Calcasieu Courthouse.