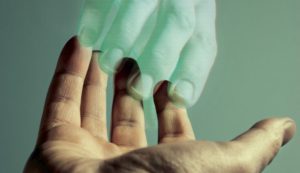 Anomalien.com reader G. (who wanted to remain anonymous) shares her story about an encounter with the unexplainable.

Early in September, 1997 I was given three months to live. I was 15 at the time and on an ordinary day hanging with friends on the stoop in front of my house, I passed out and was rushed to the hospital, where my parents were told that I suffered a severe heart attack.

I woke up and found my family huddled in the corner. The doctors came in, treated me with their best bedside manner, then proceeded to tell me that I had a diseased heart and that if I did not get a transplant I would die.

My parents and sisters came in and cried. But I couldn’t, I was still in shock. I heard my family’s words, but could not seem to answer. I was going to die. I prayed every night for a miracle. For something to save me.

I spent most of those three months in the hospital recuperating from the effects of my heart failure. I began to deteriorate. I lost 65 pounds (I was 187 when I was admitted on the first day at the hospital). I could not find the strength to even talk. I was dying and I knew it.

Late November, I was still alive, if you could call my state of being alive. I was depressed, Starving, and dying. I made my peace with God and was ready to die. One afternoon I was lying in my room when there was a knock on the door. A nurse came in and told me my grandfather was here to see me and that he was waiting outside.

My grandfather lives in Puerto Rico and for him to travel all the way to New York City was a very big trip to make. His health was failing and life was close to an end, but he still decided to come to see me. I did not answer the nurse, but she said she’d send him in.

A minute later, a voice behind me asked me to turn around. I slowly turned to see my grandfather sitting next to my bed. Tears gathered in my eyes and what he told me I can still recite today, because what he told me will stay with me forever.

He told me, “Don’t cry, my grandson. Soon it will all be over. You will get better. I know this for sure. I will die before you will.”

He smiled and told me about his “journey” to come and see me. He told me he waited a bit and then he decided to “fly with the angels” to see me. I asked him how he was doing and he told me that he felt better then any other time in his life.

For a little over an hour we talked and he then rose from his chair, planted a kiss on my forehead and said, “I will see you soon, my lovely grandson. But not so soon. I’m off to have lunch with your grandmother.”

I looked at him oddly because my grandmother was dead for some years. I asked him, “grandpa, grandma is dead, remember?” He looked at me and said, “yes to you, but not to me.” I smiled and he kissed me again and left.

That evening, my mother came to see me and I asked her when my grandfather was coming to see me. She avoided the question and proceeded to talk for a while about when she was a kid in Puerto Rico and the such. I again asked her, she said she was leaving and before she left I asked her if she was coming with grandpa tomorrow.

She looked at me and sat down, I became fearful. I could see something was wrong and I asked her what had happened to grandpa. She told me that he died whilst taking a nap. She began to cry and I just stared at her, not understanding how this could have happened.

I blurted out, “But he was just here, he saw me today. How could he have died? My mother just looked at me, her tears had stopped. I could see her hair stand up on her arm. “What?” she asked. I told her that he flew here just to see me and that he was here today.

She was sitting in the same seat that he was. She told me that it couldn’t be. My grandfather died nearly a month earlier and that they hadn’t told me because they were afraid that I would get worse.

I lay there frozen, unable to speak. My mum said it must have been a dream, but I hit the nurses’ bell and my nurse came in. “Ms. Janice, tell my mum that my grandfather came to see me today!” She told my mother a young man was sitting in front of my room and when she asked if she could help he said that he was my grandfather.

She laughed and he told her just tell him he was there, he would know who I was. My mother asked her if she let him in and she said, “Yes. He walked in. And I saw him walk out about maybe an hour later.”

My mother looked at me and said I was lying. My father then came in and my mother ran out, she was in tears. I told my father that I had seen his father there at the hospital with my own eyes. He told me no, it could not be, my grandfather had died a month ago.

I told him please believe me. I explained what he said, what my mother explained to me, and what the nurse explained to both the of us. He was shocked and left the room without speaking another word.

I did not see my parents until two days later. My father has a folder that contained the death certificate and pictures from the funeral march. He also brought pictures of my grandfather, one of which was when he was a Marine in WWI. I asked him to show that picture to Ms. Janice.

He called Ms. Janice in and asked if this was the man that came into my room that night. She confirmed that it was the same man, give or take a few years. My father’s jaw dropped. He looked at me and that was the only time I’ve seen my father cry. He hugged me and said I would be fine. My grandfather said so and it would come true.

Obviously, it did come true. My heart was replaced no more than a week after that day and I regained my strength progressively. Now at 27, I see how important and life-changing that night was. I hope this story helps everyone know that our loved ones are out there and that they watch over us.