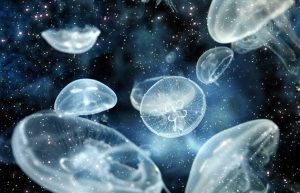 There are many unknowns that still surround the mystery of UFOs. After the latest leaks from the Pentagon and the US intelligence services, it has become clear that UAPs “are a real phenomenon and a danger to national security.”

It is unknown at the moment the origin or intentions of these strange visitors who fly over cities and towns with total impunity.

The theories of advanced races that visit us, or humans from the future that travel in our time are already well known to the general public, but lately a new theory is gaining strength.

It tries to show that the supposed UFOs would not be made of metal but of biological material, and that in reality these so-called flying objects would be nothing more than new forms of life arriving from space.

The existence of these space creatures was already raised by Charles Fort in 1948 within his work “The Book of the Damned“, and later authors such as Ivan T. Sanderson, Jhon Filippe Bezos or Trevor James Constabland firmly maintained that there was an ecosystem of atmospheric creatures of unknown origin:

“Beings with bioluminescent abilities that resemble oceanic and marine animals”

Interestingly, there are many astronauts who claim to have observed firefly snakes or something similar to jellyfish in the depths of space, sometimes photographing them and filming on video these strange forms of life as in the case of John Glenn or Franklin Musgrave.

The great researcher Andreas Faber-kaiser (Gold Medal and National Astronomy Award), published within his work “The Clouds of Deception” a chapter called “The Incredible Jellyfish of Space” where he warns us that UFOs are new forms of life that is coming to Earth.

These EBAS (Atmospheric Biological Entities) are responsible for many anomalous sightings that are confused with flying saucers that come from other worlds.

For this author, as for many others, the anomalous phenomena recorded will increase more and more, since these creatures are multiplying within our atmosphere which will lead to a series of serious problems in the future.

Independent scientists such as Ruggero Santilli, following his studies on antimatter and with the help of concave lens telescopes have published two articles on the existence of unknown and intelligent entities within our atmosphere.

The most intriguing thing about the matter is that when we attend to the most relevant cases of ufology such as the being of Évora, the Bariloche Case or the incident of the island of Colares, the witnesses assure that the UFOs seen up close had attributes very similar to those of animals, such as nerves, veins, tentacles, or flagella.

“Everything seems to indicate that these creatures are really arriving indiscriminately on our planet”.

No one knows the consequences of this colonization, but what is clear is that once this theory is confirmed, the laws of biology, evolution and physics will have to be changed.

The Mystery of UFO crash in the Crimea and Extraterrestrial Substance