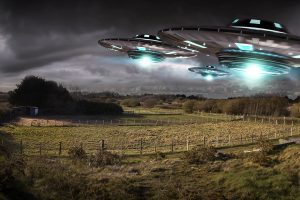 There has been a lot of press coverage since Republican Senator Mike Gallagher’s landmark speech at the congressional UFO hearings last week, where he managed to anger Pentagon officials with his questions about UAPs.

Speaking about the origin of UFOs, Gallagher offered an interesting alternative to the alien UFO theory.

UFOs spotted by the military in restricted airspace from both land and air and sea were discussed by Gallagher during an interview with The Pat McAfee Show. His guess is that these objects are either the result of enemy nation technology, or objects of extraterrestrial origin.

There is also a third option, which he called “extremely interesting” despite not having enough data.

UFO and people from the future

According to Gallagher, the third option is that UFOs are not aliens, but objects from other dimensions, interdimensional ships, or even that UFOs are nothing more than people from the future who have traveled to the past.

The congressman went on to develop his point of view on UFOs by saying that if we go back 200 years in time, we will come to a time when we don’t have cars, we don’t have the Internet, we don’t have good firearms; instead, we will have technologies that today we consider primitive.

Gallagher argued that if we fast-forward from our current point in history 200 or 400 years into the future, then whoever is left at that point is sure to tell us, “You guys can’t bend space-time? We learned this 50 or 100 years ago.”

Gallagher said that although he is not a technologist, he knows that we currently already have technology that can technically teleport something called neutrinos.

We also have the technology to prove that subatomic particles can travel faster than the speed of light. Einstein himself told us that time travel is theoretically possible.

Thus, the US Congressman considers the idea that people from the future are UFOs that we observe as a third hypothesis.

It is possible that people from the future, that is, we, have figured out how to bend space-time, and what we see is nothing but our technology that has returned to the past. Gallagher called this hypothesis the Terminator hypothesis.

It is noteworthy that Gallagher is not the only one who considers this hypothesis one of the most probable. However, he clarifies that he does not exclude that any of the others – such as extraterrestrial – is also correct.

If we are going to seriously study this issue, we must be open to all possibilities and follow the evidence wherever it leads, he concluded in an interview.

UFOs have never been so popular

It’s amazing to see how quickly UFOs have become an accepted subject of discussion. Ten years ago, UFOs were nothing more than a conspiracy theory. Although governments were doing research into the phenomenon at the time, UFOs were not something that was openly discussed in society with such freedom and acceptance.

Today the situation has changed.

Not only did people stop being afraid to talk about UFOs, scientists became interested in this phenomenon.

For example, astronomers such as Professor Avi Loeb have led the scientific race to study UFOs-UAPs and their origins.

It was Loeb who suggested a few years ago that Oumaumua, the first discovered interstellar object that flew through our solar system, had an artificial, extraterrestrial nature.

UFOs have never been so popular. It is only a matter of time before this topic explodes completely and UFO evidence hidden from the public appears, which may even change our understanding of UFOs.