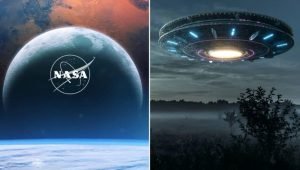 NASA confirms that it is joining the investigation of unidentified aerial phenomena The US space agency has officially confirmed that it will join the UFO hunt and increase its efforts to help the ongoing government investigation.

The agency’s new project could direct its considerable scientific weight to the search for possible signs of extraterrestrial life, not only on distant planets, but right here on Earth.

A NASA spokesperson confirmed that it was “evaluating how to provide our Earth observation experience from space to improve understanding of the UAP” and “consulted with several government agencies” but denied it was setting up its own office dedicated to the UAP.

The announcement marks a big step for the administration, which has previously dismissed all suggestion that it has anything to do with unidentified flying objects.

A US government source familiar with NASA’s UAP investigation told the Daily Mail that the project would likely involve collecting evidence from any astronauts who encountered unidentified objects in space and viewing images and data from previous missions to help investigate any anomalous encounters.

The anonymous source also revealed that the Pentagon UFO team has already requested images from the shuttle cameras on some of NASA’s space missions as part of their investigations.

“There have been several alleged incidents involving NASA astronauts and space missions involving UAPs,” he noted.

“Instead of ignoring it, I believe NASA is doing the right thing by addressing this issue head-on and evaluating how to bring its expertise in Earth observations from space to further understanding of this phenomenon.”

Last year, space agency administrator Bill Nelson revealed that he spoke with Navy pilots who encountered objects flying with extraordinary capabilities off the US coast in 2004, and expressed his openness to the idea of advanced alien life.

“”I talked to those pilots and they know they saw something, and their radars picked it up,” Nelson said in an October 2021 talk hosted by the University of Virginia.

“I don’t know the answer to whether the UFOs seen by the pilots are aliens, but who am I to say that planet Earth is the only place for a civilized and organized way of life like ours?” he added.

Scientists have discovered why people die quickly after losing loved ones

Karma: Lion Hunter Slipped And Fell To His Death During Hunt