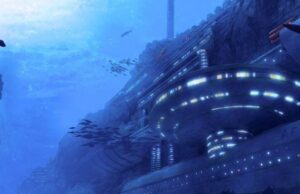 There are three planets in the solar system in the “habitable zone”. Mars and Venus are believed to have conditions similar to those on Earth.

Recently, astrobiologists also found out groundbreaking potential evidence of life in the upper clouds of Venus. This announcement pointed to the presence of phosphine, a rare and often poisonous gas that on Earth is often associated with living organisms.

The theory is that intelligent life originated on Venus earlier than on Earth, and they had enough technology to travel short distances within the solar system.

Therefore, groups of Venusians left their planet and came to Earth to study it.

Venus was able to maintain a stable temperature between a maximum of about 50 degrees C and a minimum of about 20 degrees Celsius for about three billion years.

The problem was that the Earth at that time was a frozen snowball, so the conditions for their life here were not the best.

However, under the frozen layer of ocean water there was liquid water, and some of it was quite warm in the area of ​​geothermal springs. Therefore, the Venusians developed the technology and went to live in the seas.

At this time, there was no animal life on Earth, only microorganisms. For hundreds of millions of years, these intelligent and evolved beings have watched the evolution of life on Earth, some researchers speculate.

We can only guess about their anatomy and why they did not come out of the oceans onto land once the Earth warmed up. But over time, their technology has evolved, and they probably didn’t need it.

In addition, they might have a moral code that instructed them not to interfere with natural life developing on Earth.

According to the National Oceanic Survey, a shockingly small percentage of the ocean has been studied. Just 5 percent of Earth’s oceans have been explored and charted – especially the ocean below the surface. The rest remains mostly undiscovered and unseen by humans.

This theory also explains why some of the technologies displayed by UFOs are similar to magic. It’s not magic, it’s just technology that is hundreds of millions of years more advanced.

This theory makes more sense than interstellar travelers or lost civilizations or time travelers. It is able to explain why, despite the obvious presence on our (we think so) planet – flying and underwater vehicles with “magical” technologies, they are in no hurry to come into contact with us.

The Venusians have lived on earth for millions of years. They colonized the Earth long before humans appeared on it. Imagine what humanity will be capable of in terms of technology in 700 million years, and you will receive an answer about the level of technology of aliens-earthlings living in the world’s oceans.

This theory also gives an answer to the question – why should aliens worry so much about people, warn them about the dangers of nuclear weapons and sometimes send messages about the need to reduce the population and stop the destructive attitude towards the planet on which people live.

People – received the planet in the process of natural evolution, as science says, but if the Venusians received this same planet before any life appeared on it, not to mention the appearance of intelligent life, then they have the same rights to the Earth as and indigenous earthlings.

And what people do with the planet they cannot be indifferent, since this is our common planet and when a person kills it, he kills the habitat and the home of alien colonists, for whom the Earth has become a real home, since their home planet has long ceased to be suitable for life.

This theory can also explain who and why at certain points in human history – helped people in development. Who taught them agriculture and helped them get the basic technologies that ensured the development of human civilization. Many peoples have legends and there are written sources saying that the “Gods” came from Venus.