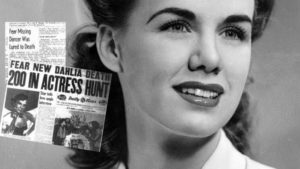 Jean Spangler like countless others dreamed of becoming a Hollywood movie star, and even if she never made it, she was going to have a great time trying. Spangler had been working as a model and was a dancer at Florentine Gardens in Hollywood. She also had a few bit parts in movies including “When My Baby Smiles At Me”, “Wabash avenue” and “Young Man With A Horn”, a film starring Kirk Douglas.

In 1949, Spangler was a 26-year-old divorced mother of a young daughter and living with her mother. On October 7th Spangler crossed her fingers, said “Wish me luck”, and walked out the door of her mother’s home.

Spangler was supposedly working on a film that night, but there were no films in production that evening, and Jean Spangler never returned home. LAPD began to search for the missing actress and two days after her disappearance they got their first break in the case when Spangler’s purse was found in Griffith Park.

Inside the purse was a note written by Spangler which said, “Kirk, can’t wait any longer, going to see Dr. Scott. It will work out better this way while mother is away.”

Before LAPD Chief Thad Brown could even organize the search for Dr. Scott, he received a phone call from actor Kirk Douglas. Douglas was vacationing in Palm Springs and had read about Spangler’s disappearance in the newspapers.

The phone call seemed rather strange because Douglas, who was never a suspect in the case, apparently called Brown to say that Spangler was in one of his movies but he barely knew her and had no relationship with her. Why Douglas felt he needed to make the call remains unknown and police never identified the mysterious “Kirk.”

As the investigation continued police learned of a man who hung out around the Sunset Strip who went by the name “Doc”. “Doc” was not a doctor, but had some medical training and performed abortions. Police were never able to find the mysterious “Doc” and the investigation had hit a dead-end. At this point one LAPD officer working on the case said the only thing they knew was that Jean Spangler was a “voracious party girl.” Another officer saying “that girl really got around.” The LAPD then began to focus on just who Spangler “got around” with.

One of Jean Spangler’s favorite hang outs was Palm Springs where she was often seen in the company of a man named David “Little Davy” Ogul. Ogul was an enforcer for mobster Mickey Cohen and was under indictment on conspiracy charges at the time.

Spangler was also seen with a man named Frank Niccoli, another Cohen associate who had also been indicted on conspiracy charges. One theory in the disappearance of Jean Spangler is that Ogul and Niccoli had agreed to testify against Mickey Cohen in return for lenient sentences in the conspiracy case.

When Cohen learned about this he had them killed and Jean Spangler who was with them was also killed. If this is true, Jean Spangler and the two mobsters are buried in the desert near Palm Springs. This theory may be true but there were reported sightings of Spangler after Ogul and Niccoli vanished. Spangler was reportedly seen in El Paso, Las Vegas, northern California, Phoenix and even Mexico City. None of the sightings ever led anywhere.

The case of the disappearance of Jean Spangler remains unsolved.