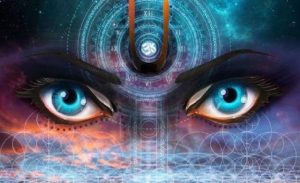 We hear a great deal about the third eye in metaphysical circles and the spiritual world. After all, it’s the gateway to clairvoyance and psychic ability. Also known as the sixth chakra or the pineal gland, this area slightly above and between the eyebrows is fascinating to say the least. Here are five things you may not know about the third eye.

1. YOU’RE NOT THE ONLY ONE WHO HAS A THIRD EYE

Most of us think that the third eye exclusively belongs to the domain of humans, but it may surprise you to know that all mammals have one. In fact, many living creatures on this planet have a pineal gland and almost all vertebrate species have one as well. Even creatures that you would never suspect—like the lowly lamprey eel—have a third eye.

Does that mean humans really aren’t so special after all? Or course not, but knowing we’re not the only ones with a third eye certainly makes you think. It’s kind of nice to know that we share this in common with other living beings. Who knows? Maybe they have psychic potential too.

2. YOUR THIRD EYE REALLY IS AN EYE

Obviously it’s not a true eye, but the inside of the pineal gland contains retinal tissue like our regular eyes. Your third eye also has photoreceptor or light sensing cells.

Finally, the pineal gland is hardwired into the visual cortex or vision area of the brain. So while it’s not an eye per se, the third eye has a lot in common with the structure of our regular eyes.

Your third eye or pineal gland produces and regulates the secretion of melatonin in the body. Melatonin is responsible for your body’s sleep and wake cycles or circadian rhythms. So in effect, the pineal gland helps you maintain your daily biological clock.

Before the advent of artificial light and working late into the night, our body rhythms mirrored the cycle of the sun’s light. We would arise near dawn and go to sleep a few hours after sunset.

As wonderful as modern life is with a 24/7 world, being up all hours can disrupt our natural circadian rhythms and even lead to disease. According to a Vanderbilt University study, such disruption may lead to a host of illnesses like diabetes and heart disease.

4. YOUR THIRD EYE CAN GET YOU HIGH

According to recent experiments performed at the University of Michigan in conjunction with research at Louisiana State University, it was found that DMT is contained within the pineal gland of live rats. What does this have to do with the third eye getting you high? Plenty.

DMT stands for Dimethyltryptamine, a neurotransmitter that acts like serotonin and is responsible for feelings of happiness and well-being. DMT also acts as a hallucinogen when ingested through mind-altering plants or drugs. However when speaking about the third eye, DMT is a natural internal substance that can make you feel good—and high on life.

5. THE THIRD EYE HAS BEEN A MOVIE STAR

Mystics and sages aren’t the only ones fascinated by the pineal gland. Authors and film directors have included the third eye as a star in many of their works. Science fiction and horror writer H.P. Lovecraft’s short story turned film, From Beyond was about scientists using a device called the Resonator to stimulate the pineal gland, with disastrous results.

The pineal gland also made appearances in a short-lived TV series called The Middleman. There was even a 2007 horror film called The Third Eye. Despite the scary books and movies, the third eye remains a magical mystery that we may never truly understand.