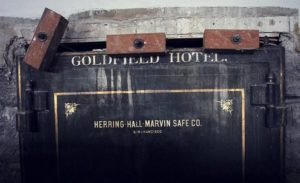 Construction on the Goldfield Hotel in Goldfield, Nevada, was completed in 1908. Gold had been discovered and the tiny towns population swelled to over 30,000.

Shortly after the hotel was built, on top of an old gold mine, it was purchased by George Wingfield, the richest man in Nevada.

The story of a haunting associated with the hotel goes back to the 1930′s and involves Wingfield and a prostitute named Elizabeth.

According to the legend, Wingfield was a frequent consumer of Elizabeth’s services and one day she informed him that not only was she pregnant, but he was the father.

Fearing the damage that could be done if news of him fathering a child with a prostitute became known, Wingfield arranged to have Elizabeth hidden away. Elizabeth was taken to room 109 of the hotel and shackled to prevent her escape.

Elizabeth died in the room, some say during child-birth while others claim she was murdered by Wingfield. Whatever happened, Elizabeth and her child died and were reportedly thrown down an abandoned mine shaft under the Goldfield.

People in the old hotel report experiencing icy cold temperatures in room 109, as well as phantom cries from Elizabeth and her child.

The spirits of mother and child are not the only ghosts reported in the Goldfield. In the 1930s a man and woman committed suicide in the hotel and their apparitions have made several appearances. In the hotels dinning room a specter named “the stabber” has been reported.

The ghost appears as an old man with a knife and lunges at guests, no one has been injured by the knife wielding phantom. There are at least 2 other ghosts at the Goldfield, ghosts of children who are heard laughing and seen playing in the lobby.

There are numerous questions about the story of the ghosts of the Goldfield Hotel. The story of George Wingfield and the prostitute Elizabeth cannot be verified.

At the time of Elizabeth’s supposed death Wingfield no longer owned the Goldfield Hotel so it seems unlikely that he would have held her prisoner there.

As is often the case with old ghost stories, what is told today is probably a combination of fact and legend that has accumulated over many years.

What may be the most interesting thing about the Goldfield haunting is that even if Elizabeth never existed, there is paranormal activity at the hotel, even if we really don’t know who the phantoms were in life.