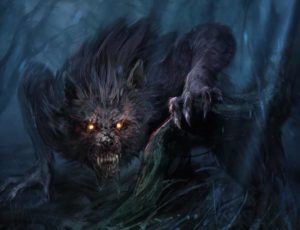 While the Timber Creek Monster was eventually killed and identified, the Bladenboro Beast was never caught and what the creature really was remains unknown.

In a period of about a month the Beast of Bladenboro was believed to have killed over 100 animals in and around Bladenboro, North Carolina. Goats, cows, hogs, rabbits and many dogs all fell victim to the Beast. The manner of death was quite gruesome.

The victims often being torn apart, or as one man put it “shredded to ribbons”. Jaws were ripped off, animals decapitated and skulls crushed. At one point the Mayor of Bladenboro posed for a picture with a dead Bobcat claiming that the Bladenboro Beast had been caught.

However, a Bobcat is just not capable of causing the type of injuries suffered by the victims. The descriptions of the Bladenboro Beast varied, indicating that there very well may have been more that one animal involved in the killings.

From sleek, black and about 2 feet tall at the shoulders to 3 feet tall with brown fur. At one point, on two consecutive nights, hunting parties of more than 800 men searched the area for the Beast of Bladenboro but came up with nothing.

By the end of January the killing stopped. The question remains however, what was the Beast of Bladenboro? Some say it was a wolf, this is unlikely however. Two of the men that hunted the Beast tracked it for several miles.

From the tracks they followed they identified the Beast as a big cat, and weighing between 70 and 80 lbs. They never saw the creature though, and there is no way to know if the creature they were following was in fact, the Beast of Bladenboro.

The most likely animal that could have been responsible for the killings would seem to be a panther or cougar. Females do weigh in the 70 to 80 lb range, and there was at least on report of the Beast where a smaller one was also seen.

Some estimates on the size of the Beast went as high as 150 lbs, which is the size of an adult male cougar.