According to legend, Genghis Khan lies buried somewhere beneath the dusty steppe of Northeastern Mongolia, entombed in a spot so secretive that anyone who made the mistake of encountering his funeral procession was executed on the spot.

Once he was below ground, his men brought in horses to trample evidence of his grave, and just to be absolutely sure he would never be found, they diverted a river to flow over their leader’s final resting place.

What Khan and his followers couldn’t have envisioned was that nearly 800 years after his death, scientists at UC San Diego’s Center for Interdisciplinary Science in Art, Architecture and Archaeology (CISA3) would be able to locate his tomb using advanced visualization technologies whose origins can be traced back to the time of the Mongolian emperor himself.

“As outrageous as it might sound, we’re looking for the tomb of Genghis Khan,” says Dr. Albert Yu-Min Lin, an affiliated researcher for CISA3. “Genghis Khan was one of the most exceptional men in all of history, but his life is too often dismissed as being that of a bloodthirsty warrior. Few people in the West know about his legacy — that he united warring tribes of Mongolia and merged them into one, that he introduced the East to the West making explorations like those of Marco Polo possible, that he tried to create a central world currency, that he introduced a written language to the Mongol people and created bridges that we still use today within the realm of international relations.

“But as great a man he was, there are few clues and no factual evidence about Genghis Khan’s burial, which is why we need to start using technology to solve this mystery.”

Lin and several colleagues — including Professor Maurizio Seracini, the director of CISA3 and the man behind the search for Leonardo da Vinci’s lost “Battle of Anghiari” painting — are hoping to use advanced visualization and analytical technologies available at the California Institute for Telecommunications and Information Technology (Calit2) to pinpoint Khan’s tomb and conduct a non-invasive archaeological analysis of the area where he is believed to be buried. Lin plans to work with Seracini to establish a position at UCSD that will allow him to spearhead the three-year Valley of the Khans project, which will require $700,000 in funding for eight researchers (including all expedition costs). 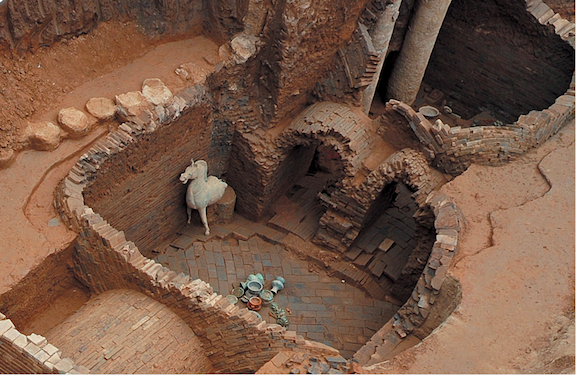 Khan’s grave is presumably in a region bordered by Mongolia’s Onon River and the Khan khentii mountains near his birthplace in Khentii Aimag, and some experts believe his sons and other family members were later buried beside him. The researchers, however, have little additional information to go on. Directly following Khan’s death in 1227, the area around his tomb was deemed forbidden by the emperor’s guards, and later in the 20th century, by strict Russian occupation, which prohibited Mongolians from even talking about Genghis Khan because they felt it might lead to nationalist uprising. Only since the 1990s have researchers been allowed in the area, and several other research teams have tried unsuccessfully to locate the tomb.

Lin hopes of success are based on his access to unparalleled technology at Calit2 and CISA3 to pinpoint the area where Khan might have been laid to rest, find the tomb itself and then develop a virtual recreation of it using various methods of spectral and digital imaging.

Explains Lin: “If you have a large burial, that’s going to have an impact on the landscape. To find Khan’s tomb, we’ll be using remote sensing techniques and satellite imagery to take digital pictures of the ground in the surrounding region, which we’ll be able to display on Calit2’s 287-million pixel HIPerSpace display wall. But we also want to make this an interactive research project and get the public involved. One of our ideas is to utilize something like the International Space Station’s ‘EarthCam’ program at UCSD, which recruits middle school students to control a satellite camera and take pictures of the earth. We’d have them do the same thing, only they’d be taking pictures of the area where Genghis’ tomb might be located.”

Lin says another approach would be to combine social networking with visualization techniques to replicate something like the online “Find Steve Fossett” project, which enlisted members of the general public to flag anomalous satellite images in the hopes that they could locate the missing adventurer.

“Once we’ve narrowed down this region in Mongolia to a certain area,” Lin continues, “we’ll use techniques such as ground penetrating radar, electromagnetic induction and magnetometry to produce non-destructive, non-invasive surveys. We’ll then work with people in UCSD’s electrical engineering department to develop visual algorithms that will allow us to create a high-resolution, 3-D representation of the site.”

Notably, these computer-based technologies are modern evolutions of moveable type and the printing press — innovations that historian Jack Weatherford argues were spread by way of the Mongols as they conquered parts of Europe (Chinese printing technologies predated Gutenberg’s printing press by several hundred years). Lin speculates that remnants of those international conquests might even turn up in Khan’s tomb, but, he adds, “The process of doing an archaeological dig is up to the Mongolian government.”

Lin says he’s hoping to collaborate with the Mongolian government and national universities, through the help of Amaraa and Bayarsihan Baljinnayam — siblings from what he endearingly calls his “Mongolian family.” They will assist with language interpretation and expedition coordination, and most importantly, local media and political support — connections that will prove very useful as Lin navigates through the often complex arena of international relations.

“He took the best resources of entire world — whether weaponry or medicine — and adopted those technologies into his own methodology. We’re trying to implement that same adaptation to many disciplines into our own work. We’re taking the great work that’s already been done in archaeology and further developing it by using technologies from other disciplines — computer vision, social networking, electrical engineering — while at the same time never forgetting fundamentals of historical search.

Despite the technologies and expertise available to him, Lin says he is well aware of the great challenges the project poses. “One consistent fact is that there is no fact,” he admits. “It’s a story of secrets upon secrets and myths upon myths.

“If I could meet Genghis Khan today, I would ask how he would have wanted to be remembered in history,” Lin muses. “The fact that he died in his bed surrounded by people who loved him and never had a single General turn his back on him, the fact that the loyalty of his people is so sound it can be heard across the world — these are the marks of one of the most impressive military heroes of all time. This is an example of a leader who was ruthless, strict, disciplined, and in a lot of ways, extremely honorable. If he was able to rewrite his own history, I wonder how he’d want it heard.”