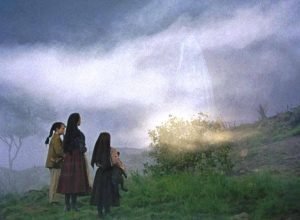 Throughout history, stories of religious apparitions have been quite common, but only a relative few have been able to influence a large number of people for several generations. The phenomenon known as Our Lady of Fatima falls into this category.

Although this intriguing apparition took place nearly a century ago, its popularity has not waned; as a matter of fact, the phenomenon was so unique and impressive that the Roman Catholic Church eventually commemorated the event by adding it to the worldwide Church calendar in 2002.

The History of Our Lady of Fatima

Between the months of May and October of 1917, the Virgin Mary reportedly appeared multiple times to three shepherd children in Cova da Iria, a grazing field near the civil parish of Fatima, Portugal.

The three children were 9-year-old Lucia Santos, daughter of the landowner, and Francisco and Jacinta Marco (ages 8 and 6 respectively), Lucia’s cousins. Around noontime on May 13th, 1917, the three children were tending Lucia’s father’s sheep when suddenly there was an abrupt change in the weather.

The children reportedly saw lightning flashes in the sky, and fearing an imminent storm, began to herd the sheep in order to take shelter in a nearby cave. Before they could leave the open field, a blinding white light began to shine above a nearby oak tree, and then the Virgin Mary appeared in the sky above them, holding a rosary.

According to the children’s accounts, the Virgin Mary reassured them to not be afraid, and that she would return once per month for the next five months in order to share a series of important messages with them.

The six total apparitions witnessed by the three children collectively became known as “Our Lady of Fatima,” although it is often referred to as “Our Lady of the Rosary” as well.

The Virgin Mary’s Visitations and Messages

According to the writings of Lucia Santos, the first visitation primarily consisted of the Virgin Mary patiently answering several questions asked by the three children. The Virgin Mary instructed Lucia and her cousins to return to the field on the thirteenth of every month for the following five months in order to receive additional instructions.

Lucia also recounted that the Virgin Mary transmitted rays of light from her hands that “penetrated” the children’s hearts and permeated the “innermost depths” of their souls. Upon departing, the Virgin Mary instructed the children to pray the rosary in order to “obtain peace for the world”, and to end the First World War.

During subsequent visits, the Virgin Mary reportedly offered several admonitions, warnings and visions regarding repentance, sin, salvation, hell, and eternal judgment. She also strongly encouraged a devotion to her own “Immaculate Heart”, specifically calling on the nation of Russia to consecrate itself to her and to God.

She also warned of an impending punishment that would affect the entire earth, alluding to a second war that would break out during the pontificate of Pope Pius XI “if people do not cease offending God.”

The Virgin Mary instructed the three children to begin spreading her message to the village, but warned them that they would suffer persecution for sharing the details of the apparitions they had witnessed.

Lucia had encouraged her two younger cousins to keep the details of their experience private, but Jacinta told her family anyway, and within a very short time the entire village knew of the incident.

Word of the peculiar event began to spread rapidly, and by August of 1917, thousands of people were traveling to Fatima in hopes of witnessing a vision or a miracle.

The provincial administrator viewed the local stir as potentially disruptive, and subsequently intercepted the children before they could arrive at the Cova da Iria, taking them to the local jail for interrogation.

According to several prisoners who were present at the time, the three children led the inmates in praying the rosary. Lucia in particular viewed their incarceration as a partial fulfillment of the Lady’s statements regarding the persecution the children would endure as a result of the apparitions.

In October of 1930, after a process of canonical inquiry, the Bishop of Leiria-Fatima officially declared the apparitions of Fatima “worthy of belief.”

The “Miracle of the Sun”

In July of 1917, the three children received a promise from the Virgin Mary that she would perform a special miracle during her October visitation in order to confirm the validity of her message, and to convince everyone to believe. 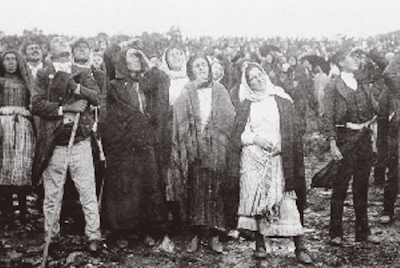 On October 15th, 1917, a large crowd–numbering up to 100,000 by some estimates–gathered at the Cova da Iria in expectation of a unique miracle. The day was marked by a torrential downpour, which allegedly ceased at the arrival of the Virgin Mary.

What happened next is now commonly referred to as “The Miracle of the Sun”: Thousands of witnesses reported viewing a disc-shaped light rotating like a wheel and changing colors several times during its movement. 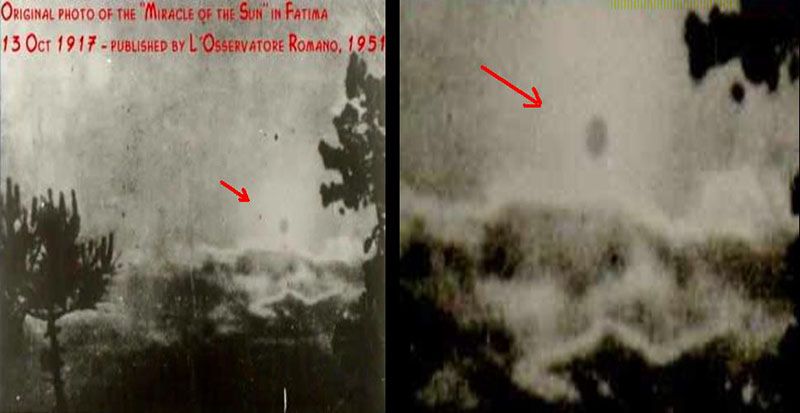 According to one report from a local newspaper, the light “spread itself” over the crowd, prompting thousands of onlookers to fall to their knees in worship and prayer. Not everyone who was present reported seeing the same phenomenon, and some onlookers, including many devout Catholic believers, reportedly saw nothing at all.

During the time of the incident, the three children claimed to see visions of the Holy Family, Saint Joseph, Our Lady of Mount Carmel, and Our Lady of Sorrows along with Jesus Christ.

No sun-related phenomena or unusual solar activity was recorded by scientists at the time of the incident. Some scientists have attributed the event to a physical phenomenon known as phosphene, which is a visual artifact that appears before the eyes as an after-effect of staring at the sun or any other type of intense light.

Other skeptics have advanced theories ranging from illuminated particles in the atmosphere to mass hallucinations.

The Three Secrets of Fatima

According to accounts offered by each of the three children, the Virgin Mary began to divulge important information to them regarding several events that carried a high level of prophetic and apocalyptic significance. This information came to be known as “The Three Secrets of Fatima”.

The first secret detailed a vision of hell, which was vividly recounted in Lucia’s memoir. She described seeing human bodies in flames, along with frightening animal-like creatures that she identified as “demons.” Lucia also intimated that the Virgin Mary prescribed “devotion to her Immaculate Heart” as the primary solution to save people from hell.

The second secret involved a “great sign” that would be visible in the night sky as an omen of a coming second great war. Interestingly enough, the largest recorded occurrence of the aurora borealis did appear on January 25th, 1938, covering a massive portion of the northern hemisphere.

Upon hearing the news of the event, Lucia affirmed that this phenomenon was indeed the sign that the Virgin Mary had foretold. Eight months later, Hitler mobilized his army to invade Czechoslovakia, an event which marked the beginning of the Second World War.

The third secret, divulged by Lucia to only a handful of church authorities, was actually kept under wraps by the Vatican for several decades. At the behest of Pope John Paul II, the secret was officially revealed by the Vatican in the year 2000.

It involved a man in white garments (presumably a Pope or bishop) being shot by a group of armed soldiers. Many followers believe that this was an allusion to the 1981 attempted assassination of Saint John Paul II in Rome.

Two of the three children, Francisco and Jacinta, died in 1919 and 1920 respectively, due to the Spanish Flu Epidemic. Lucia lived a long life and became a dedicated Carmelite nun, passing away in 2005 at 97 years of age.

All three individuals have been venerated by the Catholic Church, and Fatima is now home to the largest Marian shrine in the world. Every year, thousands of visitors make pilgrimages to the site, with the largest crowds routinely gathering on May 13th and October 13th in honor of the initial apparition, and to commemorate the Miracle of the Sun.

While scores of theories have been offered as to the legitimacy of the Our Lady of Fatima apparitions, there is no doubt that this unique phenomenon has made an indelible mark on the religious world.