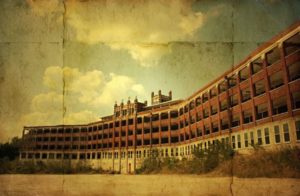 The Waverly Hills Sanatorium, or Sanitarium, located in southwestern Louisville-Jefferson County, Kentucky, opened in 1910 as a two-story hospital to accommodate 40 to 50 tuberculosis patients.

In the early 1900s, Jefferson County, Kentucky was ravaged by an outbreak of the “White Plague” (Tuberculosis). The plague prompted the construction of a new hospital.

Although at the time, the hospital was considered the best site for treating the disease, the procedures were primitive and grisly. The doctors experimented, removing organs and using experimental and illegal drugs.

Tuberculosis ravaged the mind, and caused some patients to go insane. More than 6,000 patients died during the time that the Sanatorium was open. The infamous “body chute” was used for transporting bodies to the graveyard.

Doctors thought this would prevent the spread of the disease, and leave the patients from seeing death. The hospital closed in 1962, due to an antibiotic drug called Streptomycin that lowered the need for such a hospital.

Popularized on paranormal television as being one of the “most haunted” hospitals in the eastern United States, the sanatorium was featured on ABC/FOX Family Channel’s Scariest Places On Earth, VH1’s Celebrity Paranormal Project, Syfy’s Ghost Hunters, Zone Reality’s Creepy and the British show Most Haunted and Ghost Adventures on Travel Channel.

The Waverly Hills Sanatorium in Louisville, Kentucky has its own share of urban legends about it.

One of the most well-known stories from Waverly Hills, comes from Room 502. Legend has it that in 1928, a nurse by the name Mary Hillenburg hung herself in the doorway after discovering she was pregnant out of wedlock.

Now, this is 1928, so being pregnant and not married was extremely looked down upon. Another twist to the story says that she got pregnant by a doctor that was also working at the hospital, who was married.

So the story goes that the doctor attempted an abortion on Mary and something went wrong and she died. To ensure he didn’t get in trouble for this, he apparently made it look like she had hung herself, but hanging her dead body in the doorway.

And another nurse supposedly committed suicide by jumping out the window of room 502. People have attempted to find documents of this happening, but havent found any. Though paranormal investigators always report activity in and around the room.

Below is an EVP captured outside room 502. When they asked if it ever got lonely, you can hear a faint “Yes” at the 5 second mark.

Some urban legends claim that “63,000 deaths” occurred at the Sanatorium. According to Assistant Medical Director Dr. J. Frank W. Stewart, the highest number of deaths in a single year at Waverly Hills was 152.

Stewart wrote that the worst time for deaths was at the end of the Second World War when troops were returning from overseas with very advanced tuberculosis cases. Some independent researchers suggest that since 162 people died at Waverly Hills in 1945, the highest total number of deaths possible over 50 years was approximately 8,212.

According to one urban legend, the tunnel was a “body chute” where dead patients were tossed, and a body thrown in would make it to the bottom by simple gravity.

But actually, the dead patients were strapped onto a gurney and by a rope and pulley system the gurneys were rolled to the bottom and transferred to a hearse. This was done to keep the morale high in the remaining patients.

Little Girl On The Third Floor

There have also been reports of a little girl on the 3rd floor. Some say she plays with a ball, while other people say they just hear a ball bouncing around in the hallway. Some people have seen the girl looking out the window from the outside, on the 3rd floor.

A man also said that when he was there, he saw a little girl who didn’t seem normal, and she kept saying she had no eyes, so he never went back in the building again. Can’t blame him for that one.

Another pretty well-known story from Waverly is of a little boy named Timmy. He was a patient there who liked to roll his ball down the hallway, and when he died those who visited often said they have seen a ball rolling down the hallway on its own.

Paranormal investigators usually bring a ball with them when they go to Waverly to try and get the ghostly boy to play with it, and have often caught on camera a shadow and the ball rolling on its own.

The Children On The Roof

When the building was being used to treat tuberculous, they often had the children lay in the beds or play on the roof so the sunshine and fresh air would help treat their disease.

There are some old photographs that show children on the roof with nurses. Investigators say they hear chanting of nursery rhymes and children’s voices playing.

The 4th floor is known to be the most active floor in the hospital. Some claim to see a man dressed in a white medical uniform, doors slamming shut on there own, objects being thrown at them, and shadows of people in the doorways and on the walls. Some even say that while visiting they got hit by somebody, but nobody was around.

In the video below, right at the 4 second mark when woman takes the camera and goes to point it downstairs, you can see a shadow of someone quickly leaving at the end of the stairs.

One of the most creepy place in there is the Death Tunnel. A tunnel was built going from the main floor to the bottom of the hill near the train station.

But when death rates skyrocketed, it was used so doctors could transport the dead bodies out the hospital so the patients would not see so many being taken out the building, that way they wouldn’t become depressed and have low morale and lose the will to live.

It isn’t hard to see why the Death Tunnel would be one of the most haunted places in the building, with people hearing voices and seeing apparitions.