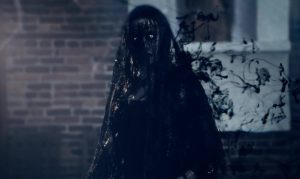 In my childhood, I had many experiences with the supernatural, one of which stands out in my memory the most.

When I was only 13 or 14 years old my family (Mom, Dad & my younger brother and I) moved to a new house just down from where we had lived for several years. Upon entering the house for the first time, I can recall a great fear and anxiety about a certain walk-in closet that separated the two bedrooms in the house.

After moving in, I would have nightmares of an old gray-haired woman (ugly) with very long fingernails coming out of the closet at me. There were times when I wasn’t sure if they were nightmares or actual occurrences.

I told my brother about them and he said he wasn’t scared of the closet and had not had any such dreams. When I told my mom, I can recall she took the news with an uneasy air about her. She told me not to think about it and it would go away..but it never did.

It was several years later, when I was in high school, and we had long moved from that house, that mom told us of an incident that had happened several times in the old house. Monday was “wash” day at our house and mom said that she dreaded it with a passion.

Not just because of the physical work involved, but because of another reason. The way mom had the bathroom set up for wash day was to have the wringer type washing machine poised next to a bathtub full of cold water.

When she would run the clothes through the wringer the would fall into the tub and mom would then bend over and pull them out to take out to dry. Mom said on several different occasions she would be bent over the tub and get a strange feeling that someone was watching her.

She would look up and see this old gray-haired woman with long fingernails standing in the doorway to the bathroom and she would start moving towards mom with an eerie grimace on her face.

I was determined to find out if anyone else had experienced these sightings before we moved into the house. I talked with the elderly gentleman who had lived next door to us when we lived in the spooky house. I asked him if he knew who lived in the house before us. I noticed a change in his usual happy go-lucky attitude.

He told me with a rather sad tone of voice that his mother-in-law, an elderly lady with gray hair had lived there. He said she had been afflicted with mental problems for some time before her death.

When I asked how she had died, he replied: “She hung herself in the walk-in closet between the two bedrooms.”