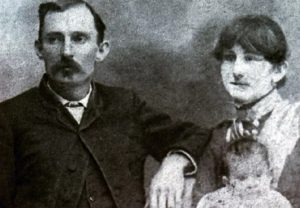 James Brown Miller was born on October 25, 1861, in Van Buren, Arkansas, to Jacob and Cynthia Basham Miller, but he was raised in Franklin, Texas from the age of one. Miller was to become an American outlaw and assassin of the Old West and was said to have killed at least 12 people during gunfights, perhaps the most of anyone in his era.

Several years after the family made the move to Texas, Miller’s father died, so he and his mother went to Evant to live with his grandparents. When Miller was just eight, his grandparents were found murdered in their home and the eight-year-old Miller was arrested for their murders, but was ultimately not prosecuted for the crimes.

Miller and his mother then went to live with his sister Georgia and her husband John Thomas Coop on their farm in Plum Creek near Gatesville.

However, on July 30, 1884, Miller shot his brother-in-law John Thomas Coop in the head with a shotgun whilst he slept on the porch following an earlier argument.

Miller was again arrested for the murder, but was this time convicted, and sentenced to life in prison, only to see the conviction overturned on a technicality.

After his release, Miller left the family home and became a hired hand on the McCulloch County ranch of John Wesley Hardin’s cousin, Emanuel “Mannen” Clements. Clements though was shot and killed by Ballinger City Marshal Joe Townsend on March 29, 1887, and in revenge Townsend was ambushed by an assailant wielding a shotgun, (Miller’s signature style), Townsend survived the attack but had to have his arm amputated.

Over the next few years, Miller traveled the Texas–Mexico border region and operated a saloon in San Saba County. In Reeves County, Miller became a deputy sheriff and later town marshal in Pecos. During this time, he gained a reputation for killing Mexicans, claiming that they had been attempting to escape.

He married Sallie Clements, daughter of Mannen Clements, in 1891, and for a short time, Miller was an upstanding citizen and was committed to the Methodist church, earning him the nickname Deacon Jim.

After a longstanding feud with Pecos Sheriff George A. Frazer, Miller shot Frazer in a Toyah, Texas, saloon, removing most of his head in the process. Several members of the prosecution and men who had testified against Miller were mysteriously killed. Miller was never convicted for any of the deaths, and in 1900, he began offering his services as a paid assassin, committing at least six more murders.

On the 27th of February 1909, Miller was hired and paid the sum of $1,700 by local ranchers Jesse West and Joe Allen, through middleman Berry B. Burell, to murder Oklahoma cattle rancher and former Deputy U.S. Marshal Allen Augustus “Gus” Bobbitt of Ada, Oklahoma.

After the murder of Allen Bobbitt, Miller was arrested in Texas by a Texas Ranger and extradited to Oklahoma to stand trial, but with the evidence against him considered to be possibly leading to an acquittal, an angry mob estimated to be 30 to 40 strong in number, broke into the jail between two and three o’clock on the morning of April 19, 1909, and took Miller and three other prisoners to the gallows, where they were all hanged.

With those words, “Killer” Jim Miller, a noose around his neck, stepped off a box and into eternity.