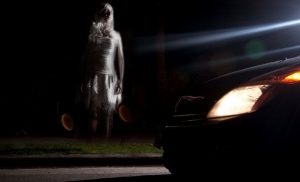 The Vanishing Hitchhiker reports is about people traveling by vehicle meet with or are accompanied by a hitchhiker who afterwards vanishes without explanation, often from a moving vehicle. Vanishing hitchhikers have been reported for centuries and the story is found across the world, with many variants.

The archetypal modern vanishing hitchhiker is a figure seen in the headlights of a car traveling by night with a single occupant. The figure adopts the stance of a hitchhiker. The motorist stops and offers the figure a lift. The journey proceeds, sometimes in total silence, and at some subsequent point, the passenger appears to vanish while the vehicle is in motion. In many cases, the hitchhiker vanishes when a (normally red) vehicle reaches the hitchhiker’s destination.

Like many other ghost stories, tales of phantom hitchhikers are difficult to verify, and are most often relegated to the category of urban legend or folklore. But there are many such stories, and it’s up to you whether or not you believe any of them.

The story of Resurrection Mary is considered one of “the most famous ghosts in Chicagoland.”The story begins on another winter night in 1934 when a young girl was killed in an auto accident while on her way home from the O. Henry Ballroom on Archer Avenue in Justice, Ill., a suburb of Chicago. Five years later, in 1939, a cab driver picks up a young girl in a white gown on Archer Avenue.

She sits in the front seat and instructs him to drive north on Archer. After driving a short distance, she suddenly tells him to stop… and simply vanishes from the cab. The cab is stopped in front of Resurrection Cemetery, where the girl is buried.

According to a 1977 account, a woman may have seen Mary locked inside the iron fence of the cemetery. Reportedly, the metal bars bore the imprints of her hands. According to the Northwest Indiana Society of Ghost Research, the girl’s name was actually Elizabeth Wilson, and the cemetery she’s buried in is actually called Ross Cemetery.

There’s a classic urban legend called the Phantom Hitchhiker, which goes something like this.

One night, a man’s driving down a dark country road when he notices a young lady hitchhiking by the side of the road. She’s pretty, with long blonde hair, and she’s wearing a blue dress. The man thinks, “She looks safe. Why not pick her up?” The young lady gets in the passenger seat and says “There’s a big white farm house about a mile down the road. Could you drop me off there?”

The man agrees. The hitchhiker doesn’t say anything else, and he doesn’t push her for more information. After a mile, the man sees a big white farm house. He turns to the young lady and says “Is this the place?” But she’s not there. The passenger seat is empty. He pulls over in front of the farm house and looks in the back seat. She’s not there either. An old woman comes out of the house and says, “Hey! What’s all the commotion?” The man explains that a young woman just disappeared from his moving car. The old woman says,”What did she look like?” “She was pretty, with long blonde hair, and a blue dress.”

The old woman says “You just described my daughter. She died in a car accident on this road ten years ago tonight.” As far as ghosts go, the Phantom Hitchhiker is pretty innocuous. But there’s a hitchhiking ghost on Route 44 in Massachusetts who seems a little more malevolent. People who have seen the ghost describe him as a red-haired, middle-aged man in a flannel shirt. He doesn’t say much, and is pretty quiet – at least at first.In one story, a driver picks up the red-haired man, who gets in the back seat. Naturally, it’s late at night.

“Where are you headed?”, the driver asks.

The hitcher says nothing but just points straight ahead. But as they head down the road, he starts to giggle. The giggles become loud laughs.”You want to tell me what’s so funny?”, the driver says. The hitchhiker says nothing, and the laughs become howls of wild, derisive laughter. “You better knock it off if you want a ride!” the driver says. The hitcher keeps laughing. The driver looks into the rearview mirror, and sees the red-haired man’s face distorted with malice, his eyes bugged out with insane glee. And then, suddenly, the red-haired hitchhiker disappears like a soap bubble. Only his laughter lingers on, slowly fading away into the night.

It’s a winter evening in Oklahoma in 1965. Mae Doria, driving to her sister’s house from Tulsa to Pryor, sees a boy of about 11 or 12 hitchhiking on the side of the road. She stops for him, he gets into the front seat along side of her, and they make idle chatter as they make their way down Highway 20. In their conversation, the boy says that he’s a basketball player for a local school, and Mae reckons that indeed he has the height and build of an athlete.

She also notices that he is not wearing a jacket of any kind, despite the fact that it’s winter. And the boy seemed to have no particular destination in mind. He points to a culvert on the side of the road and asks to be let out there. Mae is puzzled because there are no houses or lights anywhere in sight. Before she can even pull over, however, the youth simply vanishes from the car. Mae immediately stops the car, gets out, and looks around, but there is no sign of the boy. Mae later learns in a chance conversation with a utility worker that the same phantom hitchhiker was first picked up at the same spot in 1936 – 29 years earlier!

The ghost of an attractive young Jewish girl dressed in the fashion of the Roaring ’20s (hence the “Flapper Ghost”) is said to hitch rides on Des Plaines Avenue in Chicago. According to the story, during the 1930s, she would appear at the Melody Mill Ballroom, looking quite alive and human and dancing with the young men. She would ask for a ride home, then ask to be dropped off at the Jewish Waldheim Cemetery, saying she lived in the caretaker’s house.

The girl would then dash into the cemetery and vanish among the tombstones. One of the last reported sightings of this ghost was in 1979 when she was spotted by the police walking from the Ballroom toward the cemetery, where she again disappeared.

On a night in February, 1951, a British officer stops for a fellow soldier hitchhiking on the road. The stranger is dressed in a Royal Air Force uniform, and after he gets into the car with the officer, asks if he can bum a cigarette. The officer gives him one of his Camels and a lighter with which to light it.

With his peripheral vision, the officer sees the flash of the lighter, but then turning his head is astonished to see that his passenger has vanished into thin air. Only the cigarette lighter remains on the seat.

The Ghost of Highway 36

Sometimes, it seems, these phantom hitchhikers don’t always ask for rides – they just take them. In the mid-1980s, a woman named Roxie was driving along Highway 36 near Edmonton, Alberta when she was astonished to see a spirit suddenly sitting in the passenger seat next to her.

“I realized he wasn’t flesh and blood, but, needless to say, I was scared. He appeared in shades of black, gray and white, as if a black and white movie was being projected into my car.” His attire, she said, from from the previous decade and she was able to describe him clearly: black turtleneck, black pants, leather boots, blond chin-length hair. He turned, smiled at her with a small wave of his hand… and disappeared.

This story has many of the classic elements. It takes place in Tompkinsville, Kentucky.Two young men are on their way to a dance when they spot a girl their age walking along the road in a party dress. They stop and ask if she’d like to attend the dance with them.

She accepts and spends the evening dancing with them. When the dance is finished, the young men offer to take her home and she insists they drop her off at a certain spot. They agree, and since it is raining, one of the boys gives her his coat, saying he will pick it up from her later. As she requests, they drop her off at a house on Meshack Road.

A few days later, the boy returns to the house to retrieve his coat… but is told by the woman at the house that the girl he describes sounds like her daughter, who died in an accident on that road. When the boy visits her grave at the cemetery, his coat is laying beside her tombstone.